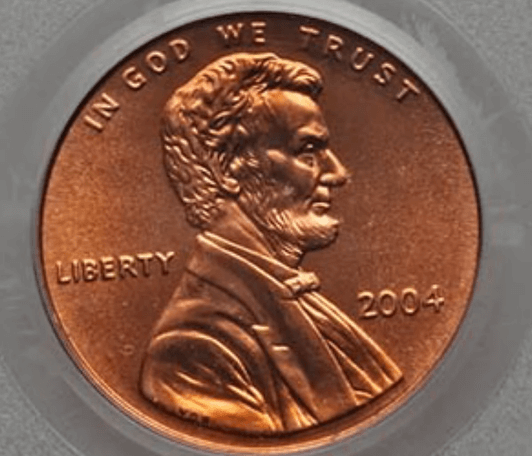 So, which 2004 pennies are safe to spend and preserve, and which ones should be kept? On the 2004 penny value, here are the qualities to consider.

Facts About The 2004 Lincoln Penny

The same pattern that has been on the one-cent coin for decades appeared on Lincoln pennies in 2004. Victor David Brenner designed the heads-side (obverse) picture of 16th US President Abraham Lincoln, which debuted in 1909. On the penny, his initials appear in tiny letters under Lincoln’s shoulder. They are spelled “VDB.”

In 1959, Frank Gasparro designed the Lincoln Memorial feature, which stayed until 1960. Until 2008, the penny was still in use. A copper-plated zinc design is used to make all 2004 Lincoln pennies, which weigh about 2.5 grams each.

The coin with no mintmark, issued in 2004, is a very common currency. The Philadelphia Mint produced billions of these 2004 pennies. In reality, there were 3,379,600,000 of them struck, and they are still in circulation today. These Lincoln cents are common coins, as they can be found in pocket change.

Typical uncirculated examples sell for 10 to 30 cents each, while circulated 2004 pennies only have face value.

When a specimen graded a nearly “perfect” MS69RD by Professional Coin Grading Service sold for $604 at auction in 2011, it became the most valuable 2004 penny without a mintmark.

How much are 2004-D pennies worth if they’re so widespread? If they’re worn, there isn’t much of a difference. Just their face value is worth anything in circulated specimens. 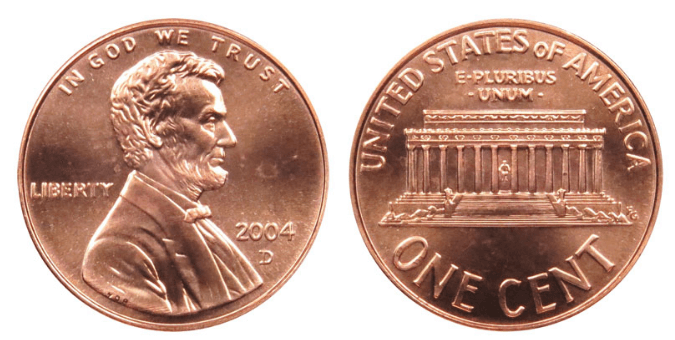 Coins aren’t just struck for use by the United States Mint. They also make collector-specific coins. The San Francisco Mint produced 2,965,422 pennies for this reason in 2004.

Proofs are the name for these 2004-S pennies, which were offered in proof sets to collectors. To guarantee that each and every detail, even the most minute, appears on the finished coin, they were struck with polished planchets (round blanks) twice on high-tonnage presses.

Despite the fact that the United States did not distribute 2004-S pennies into circulation. That doesn’t mean that others who acquired these sets or inherited them, later on, couldn’t spend some of the coins as regular money. 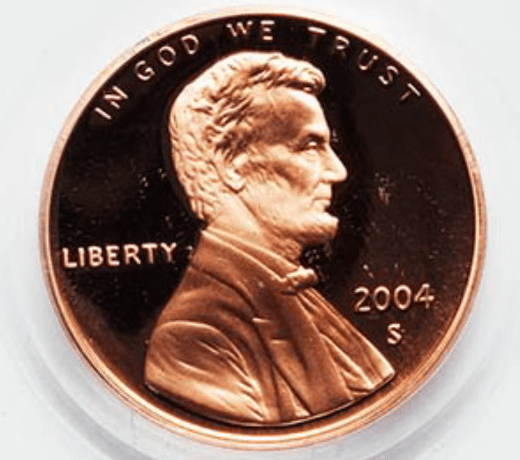 Note: Do you know the grade of your penny? You’ll need to understand what condition (or grade) your coin is in before you can determine the actual value of your penny.

The pennies in superb condition aren’t the most valuable ones in 2004; rather, those that aren’t quite “perfect.” Errors and oddities are sometimes created by the mint.

When it comes to the 2004 Lincoln cent, there is no exception! On the 2004 penny, there are several sorts of costly mistakes to seek out:

Due to the working die receiving two impressions by the hub at different positions, some 2004 pennies exhibit a doubling of letters, numbers, and other design elements (such as Lincoln’s eye or columns in the Lincoln Memorial).

You’re probably aware that a coin’s rim is razor-sharp. The coin is struck by the retaining collar, which holds the coin in place while being struck and assists to build up the rim on a coin, resulting in the formation of rims.

The coin is flattened flatter and broader by the obverse and reverse dies when the retaining collar fails to deploy, resulting in a broad strike. These rare 2004 penny broad strike errors are typically worth $5 to $10.

An off-center mistake may occur when a 2004 penny isn’t seated perfectly on the strike or the dies are misaligned. The coin’s worth starts to increase when a coin is at least 5% to 10% off center, ranging from 1% to 99%.

A die crack is a kind of oddity that may happen on a coin that dies as they age. It’s a sort of damage that may occur on a coin dies. Raised lines or bumps appear on finished coins as a result of these minor cracks or splits in the die. Any coin can experience die cracks anywhere.

A little vertical die crack between the letters “B” and “E” in the inscription “LIBERTY” is a common type of error that affects Lincoln pennies, and it gives rise to the “BIE” moniker. Depending on the appearance of the die crack and the condition of the coin, a 2004 BIE Lincoln penny might be worth anywhere from $5 to $15.

That’s all from our articles regarding the 2004 Lincoln penny value. The 2004 Lincoln penny by far isn’t the rarest, and the most prestigious coin ever minted in US history. However, there are also some of the uncirculated grades of 2004 that can give a lot of value. The pristine, 2004 penny value can be varied based on their grades, pristine conditions, and rarities.