This article will discuss the 1998 penny value and worth, how much it was valued by the local coin graders, and how much it is worth in the eye of collectors.

We would also address some of the 1998 penny errors that make some of them quite valuable compared with many other pieces of pennies. However, one thing you should always understand is, that don’t expect too much from the pennies you found easily.

Most of the 1998 Lincoln penny isn’t the rarest coins you can find on the market; it wasn’t the most valuable piece too. 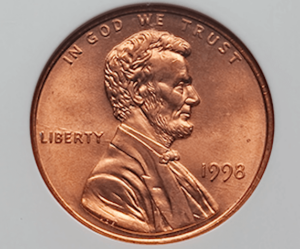 Most of the time, when you are getting the 1998 Lincoln penny, you will only get the initial face value of one cent, but some variations, error pennies, and the uncirculated grades of pennies can increase its value by more than a couple of dollars.

Before we understand the value of the 1998 Lincoln penny, how much it was worth, and how some of them can reach higher prices than others, we need to understand the coin itself.

Let’s start by knowing about the specifications of the coins, the different variations of the 1998 Lincoln coins, and the history behind them.

Specifications Of The 1998 Penny

The 1998 penny that we are talking about is the Lincoln memorial penny. With the value of just one penny, $0.01, it is used as just changes, can be found in dollar stores, and be used as the lowest initial dollars. Lincoln memorial penny was used to design, and replace the older wheat ear pennies that have been around in circulations for many years.

The revision from the wheat ear penny, to the newer Lincoln Memorial penny, was one of the political moves and economical moves.

During the 1940s, or during the great war, there were changes in metal compositions used in the penny itself. It now has a lower copper value, and post-1940s will have a very low copper value than the pre-1940s Lincoln memorial penny.

Now, to understand and delve deeper into the 1998 Penny value, then let’s discuss more its specification, series, and also metal compositions. So, here are the complete specifications of the 1998 Lincoln penny:

The Lincoln Memorial penny was used as change, and the smallest initials dollars, and has been used for circulations for many years. The observed side featured the bust of President Abraham Lincoln, while the reverse side was the Lincoln Memorial Museum. It was a very regular piece of a penny without any special features.

On the reverse side, you can see the inscriptions of the Lincoln Memorial, along with the words: “The UNITED STATES OF AMERICA”, and “E-PLURIBUS UNUM”. These words are minted in the exact sizes, shapes and dimensions.

Sometimes, there are also rarer error pennies like the 1998 close AM penny value, and the Wide AM penny.

There were three arrangements of Lincoln commitment penny that has been stepped in the year 1998. There is the 1998 Lincoln recognition penny with no mint engraving, the 1998 D Lincoln penny, and the 1998 S Proof penny.

These three are different collections since they are stepped autonomously, have different sum printed, and moreover have a substitute imperfection on them.

The first is the 1998 Lincoln penny, and it is the 1998 penny regard no mint flaw on it. It has no mint engraving, as opposed to the following two arrangements.

It was stepped in Philadelphia and the outright sum printed was 4.650.900.000 in the year 1998. It was one of the most broadly perceived combinations of those two, and practically 95% of them are in flowed conditions.

Then, there is also the 1998 D Lincoln penny. The 1998 D penny was imprinted in Denver with the outright sum stepped around 4.450.670.000, very nearly a comparable total as the one stepped in Philadelphia.

The D penny is depicted by the D engraving under the year, showing it was imprinted in Denver. A part of the uncirculated grade 1998 d penny slip-ups can be extremely worth your time and resources for pursue.

The last variety of the Lincoln 1998 penny is the 1998 S Proof penny. It was imprinted in San Francisco, with a hard and fast humble pack proportion of 4.176.560 pennies. 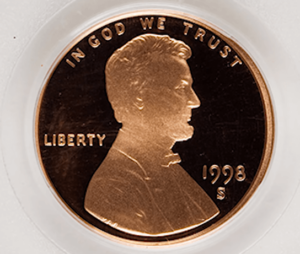 It is conspicuously not exactly the other two collections because of the S Proof grades. It was stepped as affirmation pennies, meaning a lot of them end up non-flowed. A piece of the S Proof 1998 pennies are uncirculated, remarkable, and can worth more than $50 to $100.

In 1993, there was mixed up of the die used in the Lincoln penny, making the die created after these years double die penny.

Not only the double die penny, but other several error pennies happen during this period, the 1998-d penny error list, and valuable errors you might want to keep track of.

This is the error penny list to keep track of some 1998 penny error values and worth:

The wide and close AM initials penny is one of the most notable error pennies from 1998. The initials of the AM in “AMERICA” appear to be wider or closer and some might even touch each other. 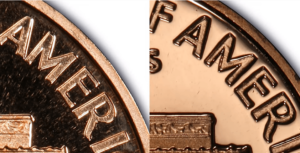 This error is essential and should not happen. As the 1998 wide AM penny value could increase from around $10 to $15 for the authentic one.

The same as wide AM initials, the FG initials were the close FG on the reverse side of the coins. The error can be seen through magnifying glasses. However, a lot of fakers try to sell the 1998 coins, pretending to have the close FG initials even though they are not.

This is one of the most common 1998 d penny error values currently, as there are at least 5% to 7% of the double die penny in circulation, and probably was being sold on the market. Some 1998 d penny value worth around $10 to $50 just because they have authentic double die errors, and of course in uncirculated grades.

These error pennies can be quite valuable, for example, the most expensive 1998 wide AM penny value that has ever sold, was valued at around $2.600 at the auction.

This was the MS 62 grade, one of the pristine, near-minted state conditions that are an incredibly rare find in today’s current coin market.

To get you started about how you can hunt, and collect some of the most valuable pieces of the 1998 Lincoln penny, you might need to know about these frequently asked questions.

The reason why some of the 1998 pence are valuable is mostly because of the grades, conditions, and error pennies.

Most of the circulated pennies are not valuable, but the most pristine grade of uncirculated conditions could reach around a couple of hundred dollars, to even thousands of dollars.

This is the error pennies, the Close AM penny, or touching AM initials penny. This type of error penny usually happens on the 1990s series of a penny, as there are a lot of mixed up during these time of years. The close AM penny if it is in circulated grade conditions will only cost you around a couple of dollars, at least $0.06 or $5 since it was circulated grade.

However, the finer grade and uncirculated grade of the 1998 close AM penny value is at least $50 with the most expensive could reach around $400.

This, in turn, makes them a pretty valuable search, but only the uncirculated one mind you, the 1998 d close AM penny value is mostly because of its rarities, and also the uncirculated grade conditions.

You can also visit your local old coin dealers, to handle out how to know the value, grades, and how much it is worth of the 1998 penny value you had.

If you want to understand better, make sure to do your research first on the 1998 pennies, old coins, collectible coins, error pennies, and so on. This is also a way to help prevent getting scammed over fake old antique coins.

Generally, If you want to get the best out of the 1998 penny value, then only the most prestigious collections and the MS grade of coins are worth your money. Most of the coins, from error pennies, and good or fine grade has already been sold, or in collectors’ hand, and the chances of finding error pennies on your own, is very slim and practically impossible without any clue.