2001 Penny Value – Why are some 2001 pennies worth more than a single cent in face value? There are a few extremely valuable 2001 Lincoln pennies. In your spare change, you might even find a few valuable 2001 error pennies! All you have to do is recognize which characteristics to look for on your 2001 penny value.

However, attempting to distinguish between a rare and valuable 2001 penny and one that is worth merely 1 cent might drive you insane.

To help increase your odds of finding some great stuff on pocket change, we’re going to show you what the unique 2001 penny looks like right now!

The Philadelphia Mint produced the 2001 Lincoln penny. There isn’t a mint stamp on the date itself. Some U.S. stamps have mint marks, which are known as mint stamps. To indicate which mint manufactured the coin. 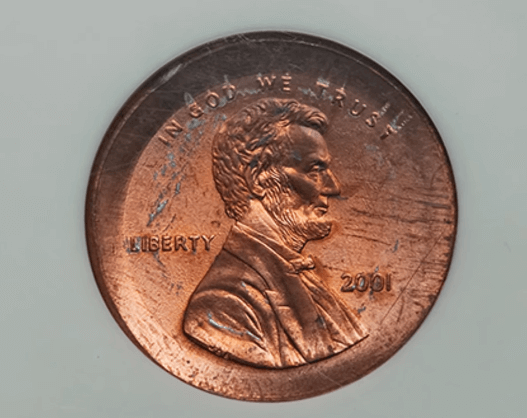 The initial United States Mint, however, was based in Philadelphia and did not put its mint mark on many of the coins it produced. Most Lincoln cents from the Philadelphia Mint are similar. As a result, it’s a Philly mint common penny if you find one with no mint mark from 2001. In and of itself, it isn’t anything unique or special.

Worn examples like the one shown above in your spare change or coin jar are only worth face value, which is one cent, since the 2001 penny no mint mark is so common. However, there are still some unusual and coveted 2001 pennies to seek out…

There are several significant 2001 penny mistakes out there, as you can see below. Uncirculated (never used as money) 2001 pennies are also worth more than face value.

A no-mint mark 2001 penny is worth between 10 and 30 cents in average condition. In 2016, a specimen graded MS69RD by Professional Coin Grading Service sold for $329, making it one of the nicest 2001 pennies without a mint mark ever sold.

Although a lot of individuals believe that due to the mint mark, the 2001 penny with the D stamp is a valuable coin, it isn’t actually true. The truth is that so many were produced in 2001 that they aren’t particularly valuable. 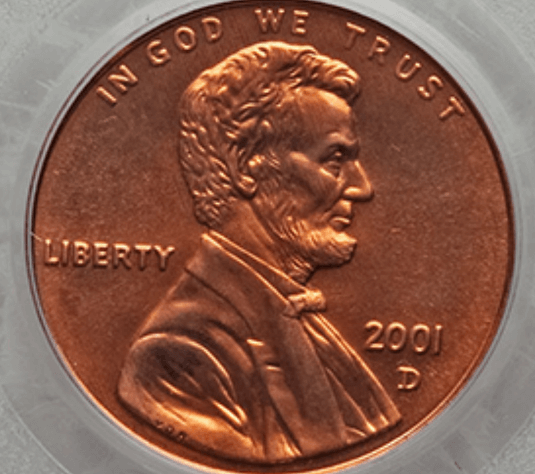 Because the 2001-D penny was minted in Denver, it features a little “D” mint mark below the date on the coin. If you find any with the “D,” you’ll automatically know where it was made because of the presence of this mint mark.

In 2001, the Denver Mint produced a total of 5,374,990,000 pennies. As a result, these coins are highly accessible. If you find a grimy 2001-D penny in loose change, it’s safe to spend it since circulated 2001-D pennies are normally worth only the face value of one cent.

For starters, there are several uncommon 2001-D error pennies available. (We’ll cover them in more depth below.)

Despite the fact that worn 2001-D pennies are only worth 1 cent, this doesn’t imply that all 2001 pennies with a D mint stamp are sold at face value. In reality, there are uncirculated 2001-D pennies worth much more than just a cent:

A 2001-D penny in excellent condition graded MS69RD by Professional Coin Grading Service sold for $1,150 in 2008, which is the highest price ever paid for one.

The 2001-S pennies were issued in proof sets exclusively to collectors by the United States Mint, and they are known as proofs. They feature an “S” mint mark denoting where they were created at the San Francisco Mint.

It is estimated that in the United States, Just for collectors, the Mint issued a tiny number of unique Lincoln cents. To help clarify even the most minute of details on the coin, these pennies were minted using polished blanks that were struck twice by specially designed dies on high-tonnage presses.

You can get 2001-S pennies for roughly $2 to $5 apiece from coin dealers today. Some proofs are nicer than others. Professional Coin Grading Service graded one of the most pure examples, PC70DCAM, and it sold for $863 in 2007. 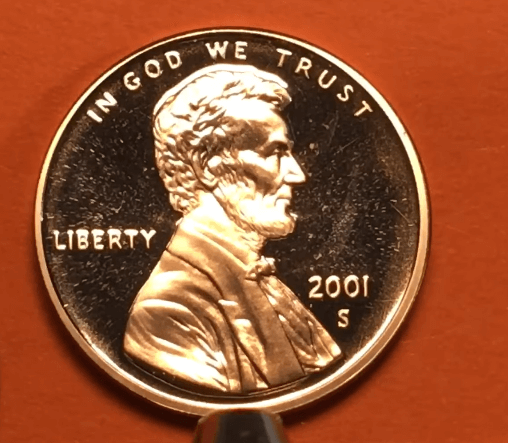 Note: Is Your Penny’s Grade Clear To You? You must first understand what condition (or grade) your coin is in to figure out the actual worth of your 2001 penny. A U.S. coin magnifier and a copy of the bill are also available. The book defines coin grading standards.

Although most 2001 pennies were produced without incident, some are less than ideal. Sadly, the bulk of the weird-looking 2001 pennies appearing to have flaws are just displaying various degrees of post-mint damage.

On certain 2001 pennies, however, there are genuine flaws and variations to discover. Let’s take a peek at what these 2001 penny mistakes are and how much money they’re worth right now…

The doubled die is one of the most common coin errors. There are a few 2001 pennies with more obscure doubled dies, despite the fact that there are currently no known dramatic 2001 doubled die penny errors worth hundreds or thousands of dollars.

In the lettering on the coin, in Lincoln’s eye or bowtie, or in the Lincoln Memorial architecture, these typically show minor hub doubling. The worth of such 2001 penny mistakes ranges from $20 to $50.

A BIE penny is a kind of error coin that comes in several denominations. Between the letters “B” and “E” in the inscription “LIBERTY” on the coin, a tiny, vertical die crack resembling the capital letter “I” appears. Lincoln cents have these varieties that are very valuable. 2001 BIE pennies may vary in value from $5 to $15 depending on the size of the die crack.

It is crucial to make off-center mistakes. 2001 off-center penny errors, on the other hand, aren’t all that valuable. In reality, the majority of people are only 1% to 3% off-center, which is not uncommon. However, if you come across one that is 10% or more off-center, then you have scored a fantastic find!

These dramatic 2001 off-center penny errors are worth between $10 and $20 or more, on average. The most valuable varieties have a complete date on the coin, despite having around 50% of the design missing. They’re valued at around $100 apiece, or even more!

That’s all from our articles regarding the 2001 Lincoln penny value. The 2001 Lincoln penny by far isn’t the rarest, and the most prestigious coin ever minted in US history. However, there are also some of the uncirculated grades of 2001 that can give a lot of value. The pristine, 2001 penny value can be varied based on their grades, pristine conditions, and rarities.