The 1939 wheat penny, as well as the 1939 D and 1939 S wheat pennies, were produced by the United States Mint. On the obverse side of the coin, below the date, the mint mark may be seen if present. The 1939 penny has a lot of information you should know about it. Continue reading to learn more about the penny.

History Of The 1939 Penny Value

President Theodore Roosevelt voiced displeasure over the United States currency’s lack of aesthetic appeal and qualities in 1904, and the currency was created. The quarter eagle, half eagle, eagle, and double eagle were the four main coins requiring a new design.

The president sent an official communication to the Treasury Secretary, requesting that a private artist assists in the redesign of the four gold coins.

President Roosevelt authorized sculptor Saint-Gaudens Augustus to create a new design for the four gold coins since there was no Congress Act prohibiting the redesign of the coins. In 1908, the design was completed successfully. The cent was thereafter redesigned by the president.

Victor Brenner, a sculptor, created a medal for the Panama Canal Commission in 1908. Fortunately, the President liked his idea for the medal and it was approved. For the first time, Brenner had the chance to create a coin that would feature an American president’s portrait.

An 1864 picture of late President Abraham Lincoln reading a book with his son provided inspiration for him. He suggested several designs for the coin, all of which needed to be altered. Ultimately, the coin was authorized for release by Treasury Secretary Woodin on July 14, 1909.

Follow along as I show you how to calculate the value of your 1939 wheat penny:

In excellent or very good condition, the 1939 penny with S and D mintmarks has a worth ranging from $0.10 to $0.50. The worth of extremely fine coins might climb as high as $2.

In 1939, three types of cents were released. In 1939, the number of low-value coins manufactured continued to rise. The Denver mint, however, was busy refining coins and producing few numbers.

The kind struck at the Philadelphia Mint is the most common 1939 Lincoln cent. There is no mint mark (that little letter you see under the date on some Lincoln cents) on these Philadelphia-minted wheat pennies. 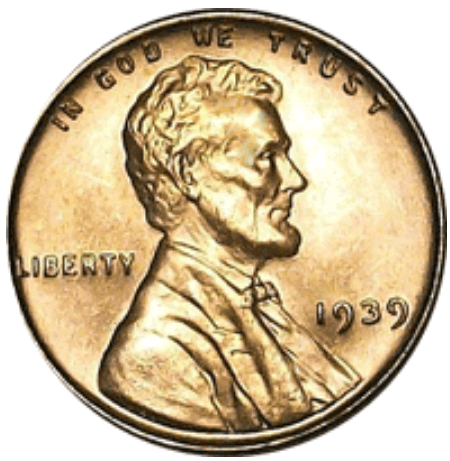 Uncirculated, or unworn, well-worn 1939 Philly-minted pennies sell for 5 to 10 cents each, while well-worn examples may command $1 or more.

Over 52 million coins were produced by the San Francisco Mint in 1939-S Wheat Penny. In comparison to previous years with the Lincoln Cent series, this was a larger mintage for San Francisco.

In higher uncirculated grades of the brown variety, this might be difficult to locate, but it does seem that some of the higher Mint State grades may be found in red varieties. 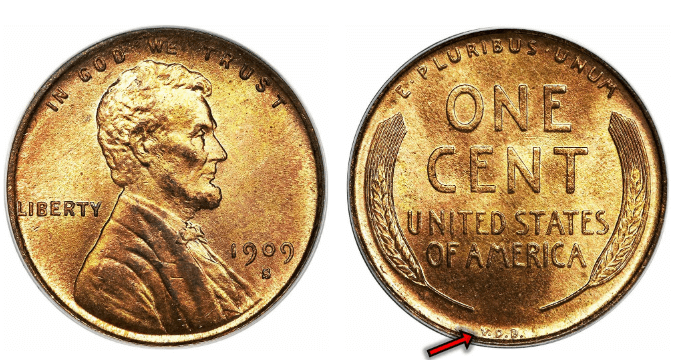 In 1939, the 9th lowest number of Denver mint variety wheat cents was struck, with 15,160,000 produced. When coins are in above-average condition, they get a premium value. Look at the top ends of the wheat stalks from the reverse angle.

Any remaining lines indicate a lightly circulated coin, which was part of the original design. 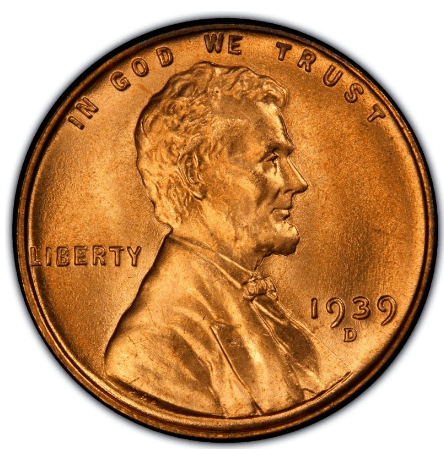 The 1939 proof Lincoln wheat cent was minted on specially prepared dies on highly polished planchets (coin blanks) and was made for coin collectors. The Philadelphia Mint produced a total of 13,520. A 1939 proof penny is valued between $35 and $100.

In 2010, however, a superb specimen graded MS-66 Cameo by Numismatic Guaranty Corporation (NGC) sold for $4,025, with frosty design elements and lettering.

Collectors are not fazed by the state of the 1939 Lincoln. The condition of their coins is assessed by a trained professional, and they prefer to have them graded. Coins that are as old as the 1939 Lincoln are graded according to tradition. The following will give you an idea of the many coin grades and how they affect the look of a 1939 Lincoln penny.

The grade must be determined accurately in order to identify an accurate value. It’s critical to have a positive first overall impression of your coin. Even color and minimal markings are positive indicators.

Good Grade: The state of complete smoothness of all major features is called Good Grade on a typical wheat penny in Good grade. Lincoln’s cheek and ear have merged, forming a single flat plane that leads to the forehead. Lincoln’s jaw looks to be very integrated with the remainder of his face, according to a close examination. To identify the jaw from the neckline, a small contour persists. His chin is level with his cheek, but it is raised from the field.

Major distractions are common with high-grade wheat cents. Among the most common reasons for a badly worn coin’s decreased appeal are nicks and stains. When selecting a candidate to add to a collection, collectors evaluate the total eye appeal. Solid for the grade is even toning over a mark-free surface.

Fine: Fine coins have a grade of Fine when they have been circulated for a long time but have avoided significant wear during that circulation. Because of the passing of hands over the years, these pieces may demonstrate indications of smoothing and scratching, but their imagery and wording will nevertheless be plainly legible.

Collectible Errors: If your coin has obvious mint errors, it may be worth a lot of money. Collectible mistakes on a currency distinguish it from other similar versions. Missing pieces of the date, lamination breaks, and planchet clipping mistakes are all to watch out for.

Rarity: As the number of coins in circulation decreases, it becomes more and more valuable. For example, the most valuable and rarest 1939 wheat pennies are found at the San Francisco mint.

MS 60 Uncirculated: There are no signs of wear on MS 60 uncirculated. There may be stains, abrasions, or surface marks on the coin, but it has luster.

PR 63 Proof: This coin has proof 63 surfaces with just a few minor flaws that are close to the key focal points. There aren’t any major problems.

MS 63 Choice Uncirculated: There are some blemishes or contact marks in the major focal areas. The coin’s luster might be less apparent.

Uncirculated Grade: Any part of the design, legends, or fields on an uncirculated 1939 cent are free of signs of wear. At the time of striking, mint frost is left undisturbed.

A region starts at Lincoln’s forehead, runs down his face to his ear, and then finishes at his chin is shown high in the profile. Luster covers these sections on a mint state coin in a fine texture. Wear is reflected in smoothness.

This penny shows off its brightness in a variety of colors. The high regions and low fields have a fresh luster. The brilliance and smoothness of the metal’s delicate texture would be dulled by any wear to these surfaces.

For some coin collectors, identifying errors and variations may be difficult. The reality is, that the majority of coins that their owners believe have a valuable flaw or variety are actually post-mint damage or changes, as seen in most of the photos I’ve seen.

Damaged and altered coins, for example, may include coins with holes, strange scratches, or folds. People often discover such coins in their pocket change.

When the hub imprints a design on the working die twice and at two slightly different angles, doubled die errors are formed. Every coin produced by the die gets a double image stamped on it. The die is sometimes replaced after it has worn out and is no longer useful.

Nevertheless, frequently when a mint employee discovers the mistake, he or she removes the die and destroys any doubled die coins he or she can locate.

Doubled die coins are uncommon and prized in all situations. Among the 1939 Lincoln wheat cents, there are a number of known doubled dies:

– 1939 Philadelphia doubled die: One major variety exhibits the lettering LIBERTY and the date on the obverse doubled in Philadelphia in 1939. There is limited information on this currency, although comparable currencies sell for $25 or more.

When an old die starts to exhibit signs of heavy wear and tear, it’s called a die break. On the struck coin, the cracks appear as raised lines. Depending on the size of the crack and its location, the value and collectability of such a coin may vary.

On the obverse of the coin, just to the left of Lincoln, one of the most popular types of die cracks is one that commonly forms between B and E. The little, vertical die crack takes the shape of a capital letter I, hence they’re called “BIE variants.” The typical price range for BIE varieties is $5 to $10.

The mintmark was hand-punched onto each working die in the 1930s. This provided limitless chances for stamping incidents in which the stamp might be struck multiple times and at various angles or in other locations. Thousands of Lincoln cents, including some among the 1939 pennies, have been discovered with repunched mintmarks. These are mostly worth $3 to $5 each.

Mistakes in punching out coins from long, thin metal strips from which the blanks come are common. Straight, occasionally crescent-shaped cuts entering the coin are seen as clipped planchet errors. Is there a clip on a 1939 penny? Make sure to keep it safe! Clipped planchets, which might cost $10 to $25 each, are excellent mistakes.

When the die is incorrectly aligned or a coin is struck outside of its retaining collar, off-center strikes occur. The severity of the mistake and the date’s visibility influence the value of an off-center strike. When the coin is substantially off the square but the date remains fully visible, this is the most valuable kind of off-center mistake.

Old pennies with strange letters or designs have been reported by many collectors. Counterstamps, which are a kind of post-mint alteration, account for the majority of them. Several counter-stamped objects were originally utilized as products, such as coupons and other marketing items manufactured by private firms.

These coins, which are part of the realm of exonumia, are often referred to as novelty coins. These counter-stamped coins are highly collectible, and many collectors adore them. Several 1939 Lincoln cents with counter stamps valued at around $1 to $2 are sought after.

Are Coins From 1939 Worth Anything?

A total of 383,716,000 pennies were produced in 1939. In the United States of America, Philadelphia, San Francisco, and Denver were the three different mints where minting took place. The most significant number of Lincoln cents issued, 316 466,000, came from Philadelphia.

As a result, the worth of the coin will change depending on its kind. Furthermore, the value of a coin is determined by several factors. The graded 1939 Lincoln pennies are valued in different ways.