1917 Penny Value – Since it closely resembles the single-cent coin that is still in circulation today, the 1917 Lincoln penny may not seem like a big deal at first glance. Most people would agree with Lincoln’s head dominates one side of the coin.

The 1917 version of the currency, on the other hand, is significantly different from today’s definition when viewed up close.

Collectors like the coin due to its great age, but the fact that there are just a few left really draws attention.

The coin has Abraham Lincoln’s profile in the center, raised from the face of the coin, which is very similar to what it is today. His face is still well-detailed on the most well-preserved Lincoln pennies, including the contours of his cheekbones and the texture of his hair.

An elevated “Liberty” inscription sits on one side of Lincoln, while the opposite side bears a mintmark from 1917. The slogan “In God We Trust” arches over top of the President’s head.

The face value of one cent is clearly stated in the middle on the reverse side. The words “United States of America” are arched underneath that, and the Latin phrase “E Pluribus Unum” is arched above it.

Two single wheat stalks are found on both sides of the reverse. The penny was given the moniker “Wheat Penny” as a result of this.

Victor David Brenner, a sculptor, designed the Lincoln penny in 1909. Surprisingly, it has been minted to this day, with just a few minor alterations in appearance, composition, and weight. Former President Lincoln profile can be seen on the coin obverse at very first glance. The inscription LIBERTY is on one side, and the minting date is on the other. The motto “IN GOD WE TRUST” is over Lincoln’s head.

The coin’s reverse shows the ONE CENT symbol in the center. The motto E PLURIBUS UNUM is inscribed on the upper rim, while the inscription THE UNITED STATES OF AMERICA is engraved below. Along the right and left edges of the wheat stalks, they stretch.

The 1917 wheat penny, along with the 1917 D wheat penny and the 1917 S wheat penny, was produced by the US Mint without a mint mark. On the obverse side of the coin beneath the date, the mint mark, if present, may be seen.

1917 Penny Value With No Mint Mark 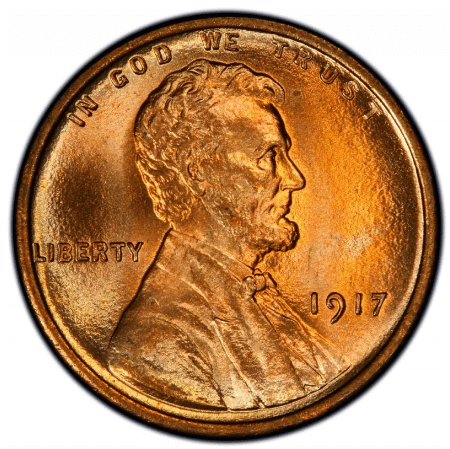 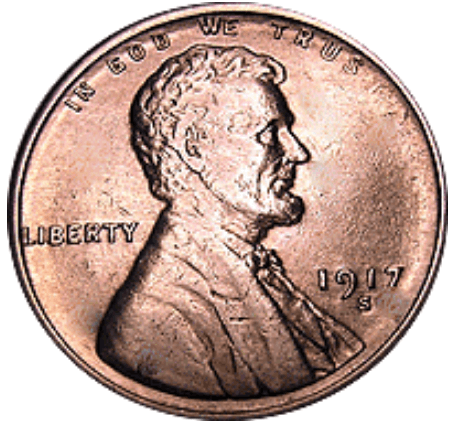 These 1917 Denver wheat cents, despite being in a lower-worn state, are considered to be plentiful. As the grade increases, rarity levers are increased. The premium in the Extremely Fine grade indicates that a highly detailed coin is desired.

Look at the lettering on both sides of the rim to get a strong value. Strong, faded letters are preferable to bold, upright letters sitting on the coin’s surface. Along the rims of many, striking differences develop.

Occasionally, you can see a penny with an error appearing on the coin market. Such coins are rare, and collectors are willing to set aside significant money to provide one for their collections. There are several scarce errors minted in 1917.

Regardless of the coin’s condition, you may see lumps or stains on its surface. Cracks in the matrix are most likely to blame for these mistakes. You may purchase one for $3 to $150, depending on the quality, and they are not expensive.

One of the most valuable doubled die errors is the 1917 Doubled Die Obverse DDO Lincoln Wheat Cent (Penny). The words “IN GOD WE TRUST” and 1917 doubled date as shown in the example photographed above are best used to identify this. Heritage Auctions provided the image for this example.

The double punch produces re-punched mint marks. A typical 1917 Lincoln penny with this sort of flaw might cost you between $5 and $20 because collectors are always interested in such items.

This mistake is only seen on a few coins. Their value may change depending on where they are located. For example, pennies moved from the center by 50% might be worth hundreds of dollars. You may purchase one for $10 to $20 if the item is less than 5% to 10% off-center.

Collectors and dealers use the grade of an old penny to determine its status. In the value chart, grades are listed in rows. Wear and surface preservation are evaluated for each coin. To see these different grades, a comparison with the images of each grade is used.

Determining grade is a crucial step in determining value. The first overall impression is critical when looking at your coin. Even color and no distracting marks are positive signs.

Uncirculated Grade: Continuous coverage of mint luster over the whole surface is the first thing to look for when grading uncirculated. The mint state – uncirculated grade is defined by the uninterrupted luster.

On an uncirculated coin, collar lines representing both Lincoln’s shirt and coat are clearly shown. They’re both near the middle of the building and have a high profile. Confirm the original surfaces’ texture and luster by inspecting them carefully. Smoothness and color change from the surrounding areas are used to indicate wear.

The 1917 penny has a superb example of eye appeal. Both the quantity of use and the beauty of a coin are judged by collectors. The appeal is further enhanced by the fact that it has excellent original luster.

Good: The coin’s surface has numerous noticeable signs of wear since it was in circulation for a long time, according to this grade. Lincoln’s clothing and coat lines are no longer visible, and his profile has been flattened. The characters and dates are still readable and legible, despite the fact that they are faded.

Extra Fine: Since this penny was in circulation for just a brief period, there isn’t any obvious damage that can be seen by the naked eye. A professional, on the other hand, will notice little scratches on the coin’s surface and wear on the relief. Partial color changes, for example, are often lost in the Lincoln profile’s razor-sharp lines.

Fine Grade: Moderate to heavy areas of wear are described as fine-grade pennies. Lincoln stands out against the backdrop, being brave. The neck and shirt are separated by a clear collar line. A small collar to his coat is also apparent, which has been worn heavily. Yet, these characteristics, while modest and subtle, aid to define a Fine grade specimen.

Wheat pennies from 1917 are typically worth $10-15. For those who are unfamiliar with collecting, this section is more of a guide.

1917 wheat cents are plentiful on a rarity scale. Of the 196,425,785 pieces minted in Philadelphia, this was the most. For coins with little circulation wear, the value has gone up.

It’s worth about 75 cents in typical circulation (AC) and $120 in mint state (MS+) condition, according to auction prices. There is no established coin grading scale that this price refers to.

We’re talking about a comparable scenario to other coins issued in 1917, and the mint state indicates that it has been certified MS+ by one of the top coin grading firms.

On sites that report coin values, check for the value of the coin. Wholesale and retail coin pricing is available on certain websites, such as:

When it comes to the millions of 1917 pennies that were produced and distributed, their thronging makes it difficult to notice when you see one.

Their intrinsic value lies in the odd examples rather than the pristine specimens, of course, because their age makes them feel valuable.

1917 pennies might not be the dazzling centerpiece of your collection, but they might still earn you a nice profit. As a result, it’s recommended to pick up a penny and examine what treasure you may have acquired the following time you find one. Afterward, see how the 1943 steel penny values and history match up by learning about them.