1933 Penny Value – The Lincoln penny is a classic piece of American currency that collectors treasure for its historical significance and sentimental value. The rare number remaining on the 1933 Lincoln penny adds to its collectability.

There will only ever be fewer coins available because they were minted so long ago. As a result, collectors go to great lengths to get these coins.

The obverse side of the 1933 Lincoln penny is dominated by a profile of Abraham Lincoln to the right and left, respectively, with inscriptions indicating the year of minting and the word “Liberty,” as well as words separated by periods. Lastly, the motto “In God We Trust” is appearing above the reverse.

On both the right and left sides of the reverse 1933 penny, you will see two single stalks of wheat, with no image in the center.

Instead, there are two raised inscriptions: “United States of America” on the right and “One Cent” on the left. The moniker “Wheat Penny” comes from these stalks. Lastly, the reverse has the Latin phrase E Pluribus Unum across the top.

While there aren’t many 1933 Lincoln wheat pennies that are truly valuable, they are definitely uncommon and harder to find than most other Lincoln cents.

The Great Depression, which started in 1929 and ended in 1941, is to blame. The United States Mint reduced its yearly coin manufacture because fewer people were spending money.

In reality, the United States was experiencing a period of great difficulty. Some denominations were even missing from Mint! In 1933, just a handful of half dollars and gold coins were minted, along with no nickels, dimes, quarters, or silver dollars.

President Franklin D. Roosevelt signed Executive Order 6102 in 1933, making it illegal to hoard gold or use gold coins for transactions.

Want to know what the current value of a 1933 penny is? You’ve come to the right place! For decades, we’ve been gathering precious old Lincoln wheat pennies and treasure teaching others about coin values.

According to the mint report, 1933 was a year of low cent production, which was followed by increased demand for small coinage by the public.

Although the number of mintages increased, another year of rarely seen pennies was struck in 1933, with 20.560 million cents produced by all mints.

You’re interested in what your well-used 1933 wheat pennies are worth, aren’t you?

Any well-worn 1933 wheat pennies in your pocket change are sure to pique your interest. The following is a list of 1933 penny value: 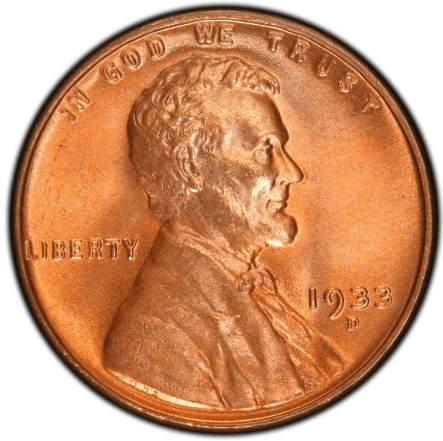 You can collect a variety of 1933 penny errors and varieties. The most popular varieties are listed below:

While many people are aware of doubled die penny mistakes, no significant 1933 doubled die cents have been discovered at this time. That doesn’t mean, however, that they don’t exist.

NOTE: It’s worth keeping aside any 1933 Lincoln cents you come across with doubling so you can examine it more closely and determine if it’s a true doubled die, even if not all doubling on a coin is hub doubling of a doubled die.

Part of the die mechanism that stamps an image on a blank coin starts to crumble due to age, heavy wear, or overuse, resulting in a die break.

On a coin’s surface, these die cracks appear as raised lines or squiggles.

When they are dramatic or create a distinctive, sometimes humorous kind of design element (such as the 1999 Spitting Horse Delaware 50 State Quarter), breaks are significant mistakes.

Depending on the size, intensity, and location of the die crack on a 1933 Lincoln cent, it might be worth $3 to $5 or more.

A portion (or sometimes nearly all) of the design on a coin that isn’t struck properly on center will disappear. While some are off-center by 50% or more, the majority of these error coins are only 5% to 10% off-center.

The so-called BIE error is one of the most common types of die crack errors on 1933 pennies.

The “D” mint issue of Denver is a significant variant of the 1933 penny value. A premium variety has emerged due to limited production and the inability to save these coins.

The wheat cent collectible category is represented by a 1933 penny. The grade is a classification that collectors use to estimate the condition of an item, and it is based on the historical significance of an item.

The last year of the worth period 1909 to 1933 is represented by 1933, which is a significant year in the wheat cents series. The early years, which are valued at much more than the base value, are two important periods for wheat cents. From 1934 through 1958, the second phase saw a large number of moderately circulated examples readily accessible and worth a few cents apiece.