1916 Penny Value – Throughout the course of its more than 100-year existence, the Lincoln penny has evolved slowly but steadily. Because it is so different from the penny in circulation today, the 1916 Lincoln penny is very desirable among collectors. Moreover, once you understand that only a limited number of these are accessible and that they will be gone for good if you do not have them, the desirability increases even more.

As a result, single-cent coins are in high demand among collectors. 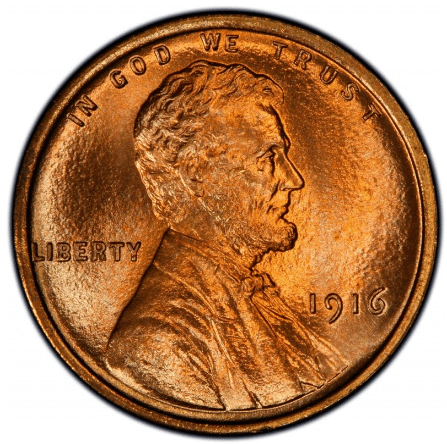 On the obverse side, the coin has a similar design to today’s penny. Abraham Lincoln’s profile is raised in the center of the coin. The President’s right bears the 1916 year of minting, whereas his left bears a raised “Liberty” inscription. The words “In God We Trust” are arched above the obverse side.

The words “United States of America” appear in the center of the reverse side of the coin. The coin’s face value, “One Cent,” is added to the inscription. Ultimately, you’ll see “E Pluribus Unum,” which is Latin meaning “from many, one,” which is an iconic American phrase.

The 1916 Lincoln Wheat Penny proof coin was the final genuine year that early proof Pennies were produced, as mentioned by the author. There have been several claims of 1917 proof Lincoln Cents surfacing, however, none have been verified. The rims and overall design of one of these early-proof Lincoln cents may be recognized from a regular business-strike Lincoln cents.

Just 600 of the 1916-proof Lincoln Cents were created, and they start at around $1,000. They feature squared-off rims and very finely detailed patterns.

Collecting the series has spawned different periods of specialization with the long run of Lincoln cent dates. 1916 cents are part of the early wheat series. There are three distinct varieties of 1916 cents, each worth its own price.

These Philadelphia cents are plentiful in a worn form on a rarity scale. The crisp detail remaining distinguishes popular collector-quality coins. The lines that separate Lincoln’s coat from his shirt should be examined.

Indications of a better quality coin include raised lines along the coat’s edge and shirt dimensions.

When collectors are considering adding to their collection, an eye-catching coin is a goal. Beginning collectors prefer these early-period coins, and Extremely Fine circulated coins are in high demand.

San Francisco had the lowest number of wheat cents, with 22,510,000 pennies produced. There are several examples of garments that have become so sloppy that the detail in Lincoln’s hair has worn away. The value placed on seldom circulated coins signals scarcity. 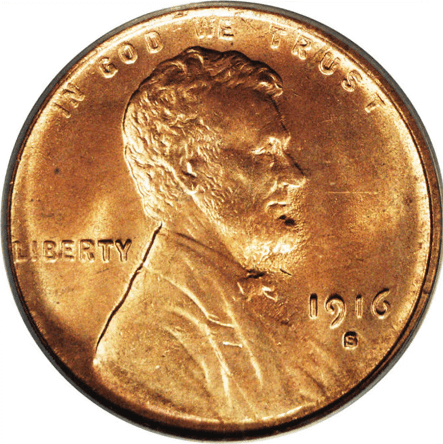 The overall “appearance” of the coin is an important factor to consider. Copper’s long-term coloration is evaluated due to its age. A lovely light to medium shade indicates care of preservation and attracts attention. Left uncovered copper finally becomes exceedingly dark.

For brown versions of the highest grade of this coin, the 1916-S Wheat Penny value ranges from $2000 to $27,000. When shopping for this coin, make sure to search carefully because adding an appealing and valuable coin to your Wheat Penny series collection is easier said than done.

The value of a 1916 D Lincoln Cent Wheat Penny is determined by whether the coin is red-red or brown, and in that order (Picture examples below). 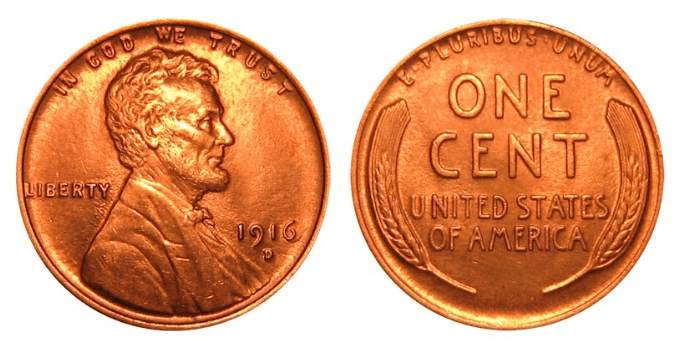 With the exception of 1943, Lincoln Wheat Cents were minted from 1909 to 1958. They are frequently referred to as pennies.

Steel planchets were used to strike them in 1943. Copper is a common name for the alloy, however, its chemical composition (see specifications below) is bronze.

Condition and Grading Of 1916 Penny Value

The values are listed in order of Grade on the charts. To determine the different grades, the condition of a coin’s surface is examined and judged. The devices’ highest regions are vulnerable to initial touch and wear, which are captured and described.

Start by giving the coin an overall grade. Collectors prefer pleasing tan and brown tones. Next, you’ll want to compare your coin to the photos and identify a condition match.

– Uncirculated Grade: Still bright with original mint luster, a coin is a strong candidate for the Mint State – Uncirculated grade. This grade requires that the surfaces be undisturbed and free of wear. The highest points are inspected first.

Several little details around Lincoln’s ear are prone to evidence of circulation wear, due to the proximity. Mint frost has its original appearance when examined closely. There is no indication of flatness or smoothness.

From its bright original color to brown hues, collectors know copper responds quickly. This old wheat cent is vibrant and close to its original color, which indicates that it has been well preserved. A collectible coin with high sentimental value.

– Fine Grade: A coin in Fine grade is characterized by moderate wear on the outer edges and heavy wear in the center areas. The most important details are apparent to see.

Lincoln’s earlobe reveals areas of merging in his hair. His forehead has a small connection and his ears protrude slightly above his head. This example is firmly in the Fine category because of the detail of the waves of hair on the back of his head.

Wheat pennies in excellent condition are well-detailed, and their value increases with the number of years. Small features add to the value.

In the example, there is a nice contrast in colors. The lighter tones of tan were contrasted by darker hues, allowing for better visibility.

– Good Grade: Coins in the Good grade have heavy wear and little flaws, putting them in the Good category. Yet, little quantities of original components may be seen through the devices. Lincoln’s ear is now a smooth surface, with intricate detail hidden behind it. Just a little contour surrounds his portrait, as seen by his ear. The center region of the coin is flat.

If copper is exposed to air, it frequently tones the color brown extremely deeply. When a coin is obtained, the lighter colors indicate that it has been protected. The value of a property is enhanced by preservation and appeal.

– MS 60 Uncirculated: There are no signs of wear on MS 60 uncirculated. There are stains, abrasions, or surface marks on the coin, although it has luster.

– MS 63 Uncirculated Choice: There are minor flaws or contact marks in the main focal areas. The coin’s luster might be less obvious.

– Extremely Fine Grade: After a period of circulation, minor patches of flatness start to emerge on the whole design. To communicate its status to other collectors, a grade of Extremely Fine is assigned when gathered. Just a modest flattening of the uppermost sections of the hair behind the ear is observed. A tiny merged area above the ear separates waves of hair. The lowest relief elements of hair and ear are crisp and bold.

At the extremely fine grade, a bold portrait of Lincoln remains. Early-year wheat cents with eye appeal are sought after by collectors in great detail. A lack of distracting marks adds to the “look” of this coin. Colors remain unchanged, including soft tans and browns.

For collectors who are new to the hobby, this section provides a more basic overview. In the AC condition, it’s worth about $2.00, whereas, in Certified Mint State (MS+) condition, it may sell for as much as $95 at auction. There is no standard coin grading scale referenced in this price.

Thus when we use the term Average Circulated, we’re talking about a coin with a similar condition to other coins minted in 1916 and certified MS+ by one of the top coin grading firms.

As there is no clear evidence one way or the other, it would be best to consult an expert if you are interested in purchasing or selling this particular coin.

There is no definitive answer to this question as the number of 1916 pennies in circulation varies, depending on factors such as price and condition. However, if you are looking for a rare penny, then it is likely that your coin will be more expensive or harder to find than others.

What is a 1916 Wheat Penny Worth with No Mint Mark?

A 1916 wheat penny without a mint mark is worth about $2.50-$3.00, depending on the condition and rarity of the coin. These coins were intentionally left unreleased to prevent them from becoming overvalued in collectors’ hands.