1929 Penny Value – Want to find out the worth of a 1929 penny? The 1929 Lincoln penny is a highly sought-after coin among collectors because of the small amount remaining and the historical significance of the coins. You may be pleased to learn that 1929 Lincoln wheat pennies are worth more than their face value.

These coins will only appreciate in value as time goes on. At least a few cents, but often many thousands of dollars, are worth 1929 pennies.

So how much is a 1929 Lincoln cent worth? That is a question that many individuals are looking for an answer to. 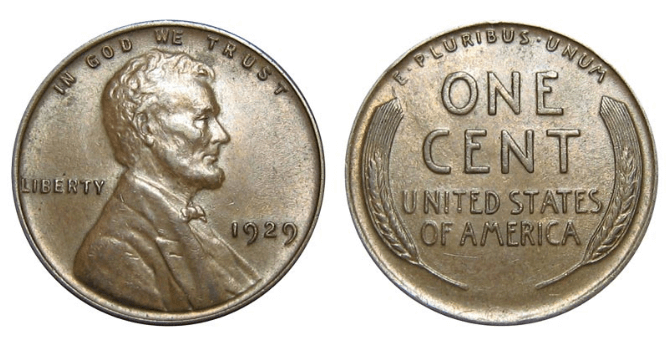 The Lincoln cent, which was sculpted by Victor David Brenner in 1909, is one of the most popular coins ever conceived. Many people collect Lincoln pennies, and some of them are worth a fortune! The value of a 1929 Lincoln wheat penny.

Abraham Lincoln is shown from the shoulder up in Victor David Brenner’s photo of the beloved former president. Lincoln is wearing a bow tie and an outfit from the era. On Lincoln’s Shoulder Truncation, Brenner’s initials “V.D.B.” appear.

The motto “IN GOD WE TRUST” is printed at the top of the design, which wraps around the rim. On the left side of the coin, “LIBERTY” appears behind Lincoln’s neck.

On the coin’s right side, the year 1929 appears to be slightly smaller in front of Lincoln’s picture. Since this coin was minted in Philadelphia, there is no mark here, but Lincoln cent mint marks appear below the date.

The reverse of Brenner’s Wheat Cent. The right and left sides of the coin are respectively wrapped in two wheat sheaths. The motto “E ·PLURIBUS UNUM” wraps around the rim at the top of the design.

The bottom arm of the E extends beyond the top arm, and ONE CENT is written in big calligraphy, sans serif. A recessed area exists in the middle arm. The legend UNITED STATES OF AMERICA is printed in a different typeface and in the smaller type beneath it.

The 1929 Lincoln cent has a smooth or plain edge.

In 1929, 277,140,000 Lincoln pennies were minted in three different mints: Philadelphia, San Francisco, and Denver. Coins include the S or D mint marks, with the exception of those produced in Philadelphia.

The Philadelphia Mint produced the most of all 1929 pennies. They don’t have a mintmark (like some Lincoln cents with the letter “m” under the date).

The San Francisco-minted Lincoln wheat cent with an “S” mint mark is Scarcer than the Philly-minted pennies from 1929. The 1929-D penny, on the other hand, isn’t as difficult to find. In 1929, the San Francisco Mint produced 50,148,000 Lincoln wheat pennies. Coin collectors have been preserving a lot of them.

1929-S Lincoln cents, which are common in pocket change, aren’t worth much money. They aren’t worthless, though!

On a rarity scale, Denver 1929 cents are plentiful. However, there are a lot of them that are in poor condition. Coins with little wear and sharp details remaining have a stronger market. 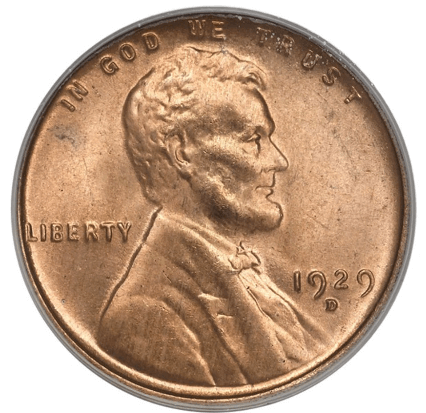 Most collections are formed by collecting date and mint varieties. The approach is further defined by paying attention to how these collections are put together. Finding Denver cents from 1929 in excellent condition becomes more difficult.

The most popular examples include Sharpe’s lettering on the rim and inside Lincoln’s coat and bowtie.

One of the methods collectors use to determine if a coin is worth collecting is by valuing it. Each coin’s preservation status and surface wear signs must be assessed before a decision can be made.

– Extra Fine Coin: During its brief existence, this currency had no effect on the penny’s appearance. An expert might detect minor harm to the relief and tiny flaws, particularly on the highest points, in such a piece, which appears almost flawless.

– Uncirculated Grade: Wheat cents in the mint state – uncirculated grades are sought by collectors. These are the highest-condition coins. The grade is determined by the lack of wear on the surface.

The hair around Lincoln’s ear has been meticulously detailed. A high-relief region vulnerable to wear can be found just over the ear. Analyze the surface for a lack of roughness and a change in color. All lesser waves of hair persist without any sleekness in texture just behind the earlobe.

The fields of this 1929 mint state cent are free of discoloration, indicating that the coin is in excellent condition. The value of a car is increased by good eye appeal.

– Good: A coin that has been in circulation for years is described as having a high grade. This penny contains numerous indications of wear and even breakage, such as scratches and breaks. The date and letters are legible, but barely visible, in the Lincoln portrait; it is a bit flattened and devoid of hair details behind his ear.

– MS 63 Choice Uncirculated: There are a few flaws or contact marks in the key focal places. The coin’s luster might be less pronounced.

– Fine: Coins with a grade of fine are those that have clearly changed hands for a period of time but will not be so severely damaged. Some scratching and smoothing can be seen with the naked eye, however, the lettering and artwork have not been damaged to any significant degree.

These pennies will have had their condition nicely preserved despite years of circulation.

Faced coins are frequently favored by coin collectors. Although the metal content of the 1929 penny was high, it was because of certain flaws that it entered the market of coin collectors. The soft imprint of the picture caused by the accumulation of dirt and grease in the die used to create it is one of the faults seen on the 1929 penny.

As the value of a penny increases due to its rarity, coin collectors prefer to have non-circulated pieces. There are a few errors in the numbers on the 1929 penny pieces. You might notice a couple where the final digit 9 seems to be a 7. A rolling or counting machine was used to cause the damage.

The final digit or characters are usually damaged in most instances.

What kinds of mistake coins should you be on the lookout for? Here’s a list of the most common and important 1929 error coins:

Doubled dies are without a doubt the most coveted type of error. The hub, which impresses the design on a working die twice and in two opposed rotational angles, creates these. Several 1929 wheat pennies from both mints have minor doubled dies known:

-1929 Doubled Die Penny: The inscription E PLURIBUS UNUM and the wheat ears show evidence of doubling on the reverse (tails side). This and other doubled die pennies are worth anywhere from $10 to $50, possibly more.

-1929-D Doubled Die Penny: On the obverse (heads side) of a doubled-die 1929-D Lincoln cent with evidence of doubling, there is the motto IN GOD WE TRUST. This item isn’t often sold in the marketplaces.

However, given prices for comparable pieces, it is visible to the naked eye and is likely worth $50 to $100.

-1929-S Doubled Die Penny: On the obverse of some 1929-S pennies, such as IN GOD WE TRUST and LIBERTY, there is evidence of a doubled die. Anything from $25 to $75 might be spent on pieces like this.

Coins may lose part of the artwork if they aren’t fashioned perfectly square. Even though they are technically error coins, many off-center errors are only 1% to 3% off and aren’t worth very much money. The value of a coin as an error coin increases when it is about 5% off or more because the coin’s worth grows as the error gets more severe.

Off-center coins with 65% or more of the design missing but with the date clearly visible are among the most precious.

Because they are much rarer than more recent error coins, older off-center errors, such as 1929 pennies with this striking mistake, are worth more:

When a worn or stressed die starts to crack, it develops breaks or cracks. On the surface of the completed, struck coin, these tiny fissures on the die form raised lines. Since they are so dramatic-looking mistakes, coin collectors adore to die cracks.

When it comes to all of the conceivable routes a die split might manifest on completed coins, the sky is literally limitless, but a prevalent kind of die split error on Lincoln cents is that of a raised vertical line between the letters “B” and “E.” This appears to be a location on the die that is prone to breakage.

Lincoln pennies have more than 1,500 different types of BIE anomalies, making it one of the most sought-after die-break anomaly coins.

BIE pennies, as a class, are quite uncommon in 1929. Others, on the other hand, are well-known and sought after. Pieces that are well preserved or have a particularly strong die break are worth more, ranging in value from $5 to $15.

The 1929 wheat penny is a popular coin among investors. With all of the factors considered, they can purchase it for a cheap price and then sell it for a much higher price.

You’ll learn how to grade these pennies and determine for yourself if the coins in your hands are worth more than their face value. Who would believe that a penny might have value beyond being circulated? This has been shown with the 1929 penny.

Even if a large number of pennies were issued at the time, they are valuable pieces and collectors’ items due to the errors some individuals made, as well as fluctuations in the world economy and market. If you’re into collecting a 1929 Lincoln penny and want to sell something in the future, the information in this article might be of assistance to you. For us, getting information is often a benefit.