1918 Penny Value – During 1918, San Francisco’s official mintage struck a minted wheat penny of Lincoln pennies, with a total amount of 34.680.000, along with the S minted mark. This penny has a face value of one penny, or $0.01, however, the worth is much more worth behind its initial face value. The typical 1918 penny value is around $0.6 and $35 if it is in circulated condition, however, the price will jump high.

Before knowing the 1918 penny value today, first, we need to take a look at the history behind this penny, why some of them might be worth a lot of money, and basically how to find the 1918 wheat penny.

The 1918 wheat penny, also known as Lincoln wheat pennies, is a series of pennies that first appeared in 1909. It was minted to replace the older Indian head penny, as the commercial penny changed.

This penny specifies that it has a bust of U.S president, Abraham Lincoln, with the motto of “IN GOD WE TRUST” on top of him, “LIBERTY” on the side, and the date of minting.

On the other facet of the coin, we can see the “ONE CENT” mark, along with the typical ears of wheat on each side.

It is made from a combination of copper and tin, both of which are valuable metals ( for more please check the article about most valuable foreign coins ).

The composition of this coin is 95% copper, with the rest being tin and zinc. These specimens are minted in San Francisco in 1918, and also in Denver mintage.

First, let’s take a look at the composition, and specifications of this 1918 Lincoln wheat ear penny shall we?

Here are the initial specifications for the 1918 Lincoln wheat penny

However, in 1918, the initials reappear, now in more discreet locations, right under the shoulder of Lincoln’s bust.

These discreet initials normally disappear once the penny has been older, and spent its time in circulation, has it is very rare to have a mint that still has these special discreet initials. However, nowadays, this won’t change much in the 1918 penny value.

So, to answer the question of how much is a 1918 penny worth we need to understand the wheat penny types.

Each of them is different because they are minted in different states, and circulated in quite different markets of course. There is also a difference in the number of coins that have been circulated and produced.

Based on its type, each of the 1918 wheat penny values could be different, depending on rarities, oddities, as well as value.

To understand more about how it was graded, and what types of the wheat penny you should keep or you should buy, here is the type of the 1918 Lincoln Wheat penny dollar.

The abundance of this number makes it such a common series of coins and makes the 1918 penny value very cheap.

With the good quality of the 1918 Lincoln penny value from $0.2, to the fine grade of $3, this is one of the most common series of this penny.

The 1918 s penny is minted in San Francisco with a precise amount of 34.690.000 in production and circulation. This typical penny has an S minted mark on it that differentiates it from other types. 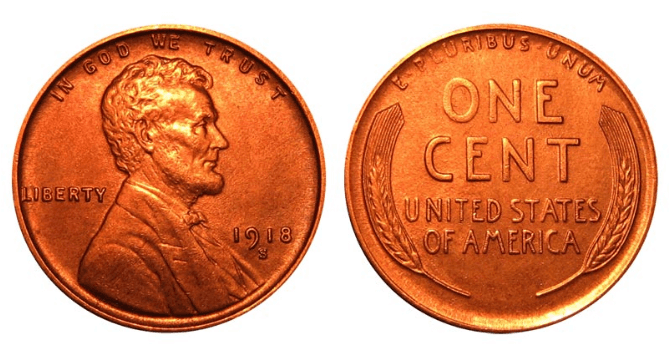 Even though the D wheat is very common, there are quite good values of the 1918 d penny. Some of the 1918 d wheat penny value could be higher than it looks, especially some of the uncirculated specimens. 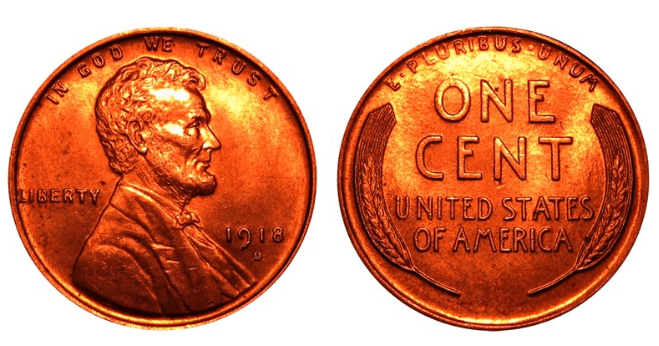 It could be worth more than $100 to $150, and even the most expensive D wheat penny value that has been sold in auctions is MS 67.

The most expensive wheat penny are the specimens of MS 67 D red Lincoln penny that are worth around $60.000.

Notable 1918 Wheat Penny Error List: You Should Keep An Eye On

One thing that can affect the value of antique coins such as the 1918 Lincoln wheat penny is an error. Error pennies are pennies specimens that contain some errors, like a pre-punched mint mark, cracked mint mark, and so on.

These errors are slight in the mintage, usually caused by environmental damage, or damage while in circulations, however very rarely known, are the mintage errors for the penny.

However, if you are extra lucky, and able to find certain error pennies, then you should know that some of them can be sold at a quite high value, even increasing the value of the usual 1918 penny to 10 or even 20 times more.

To make sure you know which error penny is worth your time, here are a few notable wheat penny errors you should take note

To this day, there are at least 5 to 10 percent off-center coins that are mostly worth around 10 bucks to 20 bucks. However, some 50% of off-center errors can cost more than a hundred dollars.

A die crack penny is a penny that has small bumps on the surface, this sometimes results in having more weight, more metal composition, and overall more worth than the usual penny.

These changes oftentimes result from damage, environmental exposure, gouges, and cracks on the die.

The die crack penny, is worth around $3 to $5 apiece; however significant cracks might improve the price by up to $10 to $20.

It is similar to a die crack penny when bumps appear on the penny, but now instead of the coin surface, it is on the rim of each coin, For this error, it is often worth around $50 to $100 which is quite a hefty amount of money.

Mintage might sometimes punch on the die, stamped with the mint mark twice, this is called re-punched mint mark. Some coin collectors will pay around $5 to $20, and if the error is quite significant, might result in more value than usual.

There is also a 1918 wheat penny with no mint mark value that could be inflated due to the errors. No mint mark error is when the mintage didn’t stamp the mint mark properly, and faded out due to the damage, and environmental exposure. These error coins could be worth around $5 to $15.

The 1918 penny value can be worth more if there are significant types of quality, rare grade, and also has rare errors that many collectors appreciate.

The 1918 penny value can be quite fluctuated based on the grading, quality, rarities, and the type of pennies themselves.

It is best to get to know the rarities and the worth of each penny before deciding to purchase, or collect a certain 1918 wheat Lincoln pennies.

Sometimes, the standard price for an old 1918 penny could fluctuate due to the increasing price of precious metal inside of each penny.

The 1918 penny contains Copper and Zinc, a precious metal that weighs its value more than a penny or $0.01 nowadays.

With the increase in precious metal price, the worth of the old undiluted, unclipped, and uncirculated 1918 Lincoln penny could inflate.

Typically, not every 1918 Lincoln penny could be worth anything; some would just get you around $0.6 at max, while others might get you a few bucks. It is true, that some rare specimens of 1918 could reach for around hundreds of dollars, but finding them is incredibly rare, and you need to trade them with several coin collectors.

Is a 1918 wheat penny worth anything? That depends on the grade, quality, and the rarities the 1918 coin might bring. If you have rare wheat pennies, then the price could go up from around $10 to $20.

So in conclusion, don’t just throw off your 1918 penny yet, some of 1918 might have more intrinsic value than you might think. If you are unsure if your 1918 penny value could be worthy of your time, then you can try grading it in your nearest coin grading service. You can also try your luck in coin hunting, and try to hunt rarer error pennies.