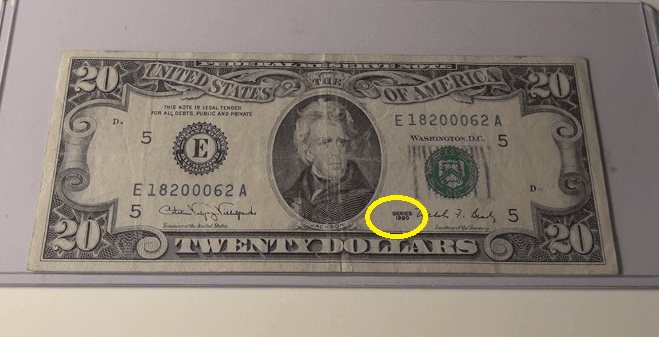 Two separate locations produced the $20 banknotes from the 1990 series: Washington, D.C. a small “FW” on the front of the bill next to the green seal can be used to identify notes printed in Fort Worth, Texas.

Most 1990 Series $20 bills printed in Washington, D.C. will only sell for a premium in uncirculated condition. Star notes can sell for higher prices.

Bills from the Federal Reserve Bank of Minneapolis can sell for more money if they are in uncirculated condition and have a grade of MS 63.

Bills issued by the Federal Reserve Bank of Minneapolis are worth around $50 in uncirculated condition with a grade of MS 63.

The value of the 1990 series $20 bills printed in Fort Worth, Texas depends on the issuing bank. In uncirculated condition, bills worth about $40 with a grade of MS 63 are issued by the Federal Reserve Bank of San Francisco.

The United States Federal Reserve printed star notes, which are more uncommon and thus more valuable, by printing a star symbol at the conclusion of the serial number on the 1990 series $ 20-star notes.

For notes with an MS 63 grade, the price is about $80-85 in uncirculated condition.

There might be one or two minor creases or folds. The note is still quite crisp, and it’s also nicely centered.

How can you tell if a 1990 $20 bill is genuine? The thread should be imprinted with the text “USA TWENTY” and a small flag in an alternating pattern, and it should be held to the light to see an embedded thread running vertically on the left of the portrait. Both sides of the note are visible. When ultraviolet light is applied, the thread glows green.