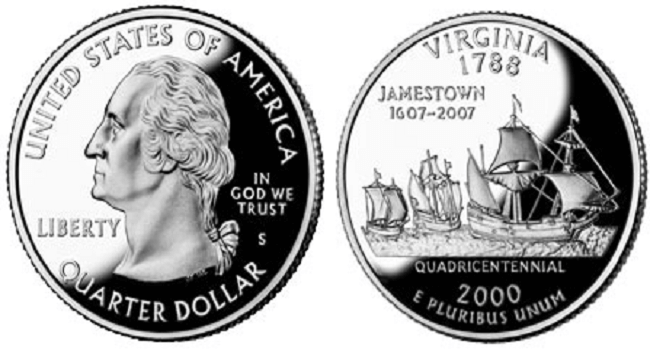 Actually, there is no drastic change or difference between the Virginia Quarter coins with other quarter coins that were released before.

What really differs is the design of the backs of these quarter coins, which is a hallmark of each country.

For a clearer description of the 2000 Virginia quarter, you can see the information below.

The obverse of the Virginia quarter coin has not changed much from the original design. Like the other quarter coins released in 2000, this coin was also designed by John Flanagan and William Cousins.

This quarter’s coin features President George Washington. In addition, you will find inscriptions of United State of America, Liberty, In God We Trust, and Quarter Dollar.

Underneath the words, In God We Trust are mint marks in the form of letters which are on the back of the previous quarter’s coin designs. This is meant to give plenty of room at the back for the designs from the states.

The back is designed with a theme in accordance with the characteristics of Virginia. The design for the back of this Virginia quarter coin was by Edgar Z. Steever.

The design on the back features the Susan Constant, Godspeed, and the three ships that brought the first English settlers to Jamestown.

Around the pictures, there is an inscription such as Virginia 1788, Jamestown 1607-2007, Quadricentennial to signify its 400th anniversary, 2000, and E Pluribus Unum.

The mint mark is a letter symbol on a coin that indicates the mint in which the coin was produced. 2000 Virginia quarter produced in Denver (D) and Philadelphia (P).

Value and Worth of Virginia Quarter

So, how much is a 2000 Virginia quarter worth based on the mint sign, see below.

A Virginia Quarter marked with a Mint D was produced for a quantity of 651.616.000. It values at around $2,41 in an uncirculated MS63 condition and worth around $2.75 in the brilliant uncirculated MS65.

The error of Virginia Quarter

There are types of 2000 Virginia Quarter errors, you can see below:

This happens when something goes wrong on the design part. For example, the embossed year sign or the image of the ship’s symbol has some kind of crack or is of an imperfect shape.

It happens because there is an error occurs when cutting a round coin shape from a large sheet of metal, so the shape may not be perfectly round.

It happens when a letter is missing or the coin design is incomplete.

It happens when the coin is used so frequently that there is damage to the design of the coin.

If you have a 2000 Virginia Quarter in your pocket, try to see It carefully. Who knows, you can sell it at a high price if there is an error in your Virginia quarter coin.