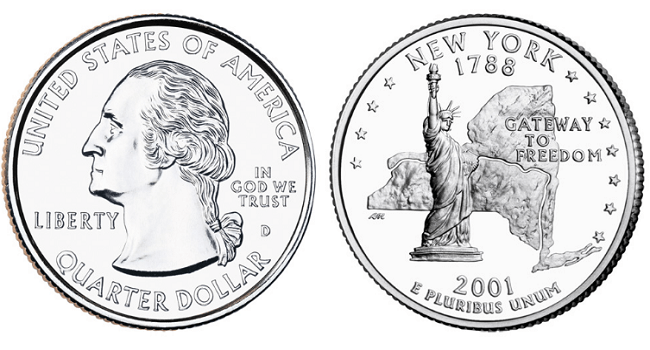 The New York quarter coin was the eleventh coin released in the Statehood Quarters program and the first to be released in 2001.

John Flanagan and William Cousins ​​are still the designers of the 2001 New York quarter coin obverse. The design of the front also still features a statue of President George Washington which can be seen on the left side of his face.

There are inscriptions like the United State of America, Liberty, In God We Trust, and Quarter Dollar.

In addition, there is also a mint mark under the words In God We Trust as a special sign where the coin was issued.

The rear of the 2001 New York quarter was designed by Alfred Maletsky. Features an image of the Statue of Liberty, an outline of the state, and 11 stars representing New York’s position upon acceptance into the Union.

The inscriptions on the back consist of writing New York 1788, the motto Gateway to Freedom, 2001, and E Pluribus Unum.

Then about seventy-five to eighty percent of the material that makes up the coin is made of copper, and the rest is made of nickel. It’s because all coins issued in Statehood Quarters are clad.

Value and Worth of New York Quarter

So, how much is a 2001 New York quarter worth based on the mint sign, see below.

The error of the New York Quarter

There are 5 types of 2001 New York Quarter errors you must know.

It occurs when the die striking and the planchet are not properly aligned.

It happens caused of doubling in some parts of the design.

It happens because there is an error occurs when cutting a round coin shape from a large sheet of metal, so the shape may not be perfectly round.

It happens when a letter is missing or the coin design is incomplete.

It happens when the coin is used so frequently that there is damage to the design of the coin.

Try to check your pocket who knows you have the 2001 New York quarter, note the mint mark beneath the words In God We Trust. If your quarter coins have errors, they can be priced higher when you sell them to collectors.