For you who are collecting old coins, having a 1953 quarter value worth more than its number might become a fascinating experience. The old coin which has been through many years brings so much historical value, just in a tiny physical coin.

How do you feel about holding something physical in your hand that was made at the time when Julius Caesar was advancing the British Empire when Socrates was lecturing, or the American Civil War was raging, or any other time period? Fascinating isn’t it?

Consider the hands that the coins may have traveled through. Who carried these in their pockets or purses? There are countless alternatives, including employees, generals, soldiers, dictators, emperors, and movie stars.

And, as one user noted, coins are often available for anybody starting the pastime. Although gold will be pricey and exceedingly rare, unusual and expensive goods can be found in any pastime.

Is Coin Collecting Worthwhile As A Hobby?

Absolutely! A piece of history and art is in your hands. The language and images used to portray many nations and civilizations are amazing. By the person or thing that people commemorate with an image on a coin, you might infer what is significant to them.

On antique coins that were in circulation, precious metals like gold and silver are also present. It indicates the relative wealth of a country at a specific moment. Finally, you can speculate about the coin’s history and potential owners. These are a few of the factors that make coin collecting intriguing and valuable.

As for a coin collector, the 1953 quarter value might be beneficial as both silver bullion and numismatic coins. Well, keep reading till the end to learn everything about these coins. 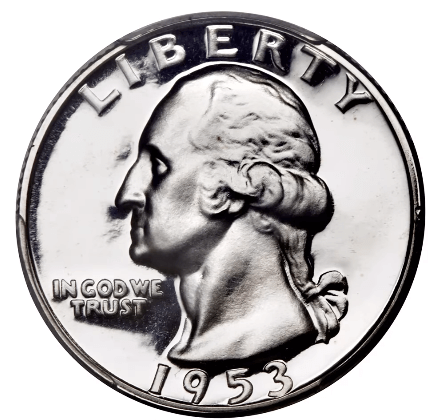 The 1953 Quarter Value in General

In circulating condition, this coin value is worth at least based on its silver weight. As of November 8, 2022, this coin with the silver weight (if melted) value is $3.85. Based on the current silver spot price of $21.29 per ounce, this melt value has been determined.

In exceedingly great form, the 1953 quarter value without a mint mark is worth around $6.50. For coins having an MS 60 grade, their value in the uncirculated condition is around $9. MS 65 uncirculated coins may be purchased for around $25. 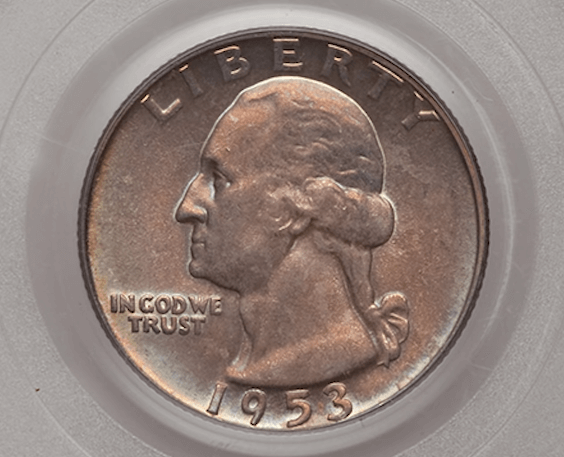 Available proof coins without a mint mark are valued at about $45 in PR 65 condition. 128,800 proof coins were produced.

The hairlines appear distinct. The eagle’s breast and the tops of its legs are the only areas that show wear.

Nothing appears to be worn. The coin has brilliance, but it can also have some surface stains, abrasions, or blemishes.

Eye appeal and strong luster are present. There could be a few little contact marks, but they are hardly discernible.

1953 Quarter Value Based on Condition

In 1953, Washington quarters were made at three distinct mints: Denver, San Francisco, and Philadelphia. The Philadelphia-issued coins are the most expensive in the higher “Uncirculated” grade. The reverse has the “D” or “S” mintmark, signifying the other mints.

Second, consider the condition of your currency. Is it faded and jaded, or crisp and sharp, sticking out from the crowd?

The condition of Washington quarters is critical to their pricing and appeal. Compare the condition of your coin to the “Grading” photos below to get a sense of where it stands on the value chart.

Is your 1953 quarter value worth more? The coin in the adjacent image is a really good uncirculated quarter that any collector would be happy to add to their collection; it is also the sort of coin that a dealer would pay more for. It’s possible that your 1953 quarter is worth more.

A quarter with the date “1953-D” was coined in 1953 at the Denver Mint. The mint markings on the Washington quarters of 1953 may be seen on the reverse, immediately below the wreath.

Details About Grading of 1953 Quarter Value

The condition photographs are arranged to demonstrate the various phases of wear on a Washington quarter. The explanations clarify the “Grade” and emphasize the important factors to think about.

Hopefully, this displays a higher grade and your 1953 quarter value is far greater than the minimum.

Uncirculated: Has never been touched and appears as though new from the mint. The coin’s hue might be dazzling silver-white or organically toned. Technically, the criteria are a complete lack of wear. Look for the earliest signs of circulation abrasion, such as a crack in the delicate sheen on the cheekbones.

Extremely Fine: This quarter shows minor signs of circulation but was stored before too much wear accumulated. When you examine the hair, you will discover that the intricacies have vanished. The roundness of Washington’s neck and cheekbones has also softened. If you have a “D” or “S” issue, there is still a collector premium on the 1953 quarter value.

Fine: This quarter has beginning to show signs of wear. Washington’s hair and curls are hidden behind flattened regions of wear. Despite the fact that the hairline along the brow is evident.

Good: The circulation has smoothed down the Washington portrait, but the vital elements remain. Except where it has begun to melt into the inscription and date, the rim of a 1953 quarter is typically still highly discernible.

All of the coin values are from the United States. It’s a fantastic index containing photos and text links to every coin series, from cents to gold. Important grading photographs and coin value charts reveal how much your box of antique coins is worth ( foreign coins worth money ).

The incredible quality and condition resulted in an incredible bargain. The 1953 Washington quarter coin was auctioned off by Bowers and Merena. This 1953 quarter is now worth $690.

In look, this is a magnificent coin. Sharply struck with a vivid mint shine and silver-rose patina. In this level of preservation, it is quite unusual.

If you believe your coin is “Uncirculated,” auction results demonstrate that a 1953 quarter is worth treating with care.

Yes. Washington Quarters made in 1953 are 90% silver and contain.1808 troy oz or 5.623 grams of pure silver in total. The weight of silver is measured in troy ounces. Troy ounces are roughly 2 grams heavier than standard ounces.

Are quarters from 1953 worth anything?

This year, 1953 Washington Silver Quarters minted 128 thousand proof in total. If you have one or come across one around town, it is worth roughly $45 in PF-65 condition.

How much is a 1953 D Washington quarter worth?

What is a rare year for a quarter?

Quarters minted before 1964 are 90% silver and are highly valuable. Because of the high value of silver today, your ancient coins are worth unexpectedly valuable. All design series contain scarce and uncommon quarters. Also, early period quarters like the 1796s until the 1890s, are quite rare.

The 1953 quarter’s mass of 6.25 grams and diameter of 24.3 millimeters is normal for the series, and it is made of silver type.

What does the D mint mark mean on a quarter?