1959 Nickel Value – The 1959 Jefferson nickel is a nice coin for beginning collectors because of its availability, and it is still in circulation. When the Buffalo nickel was struck in 1938, it was replaced by the Jefferson nickel, which was more popular among collectors and people alike.

Felix Schlag created the Jefferson nickel to honor a founding father and former US president, following in the footsteps of other coins like the Lincoln cent and the Washington quarter ( foreign coins worth money ).

A profile bust picture of Jefferson facing left appears on Schlag’s obverse. The motto “IN GOD WE TRUST” is on the left rim, while the legend “LIBERTY” and the year of manufacture are on the right rim.

The denominations “E PLURIBUS UNUM” and “UNITED STATES OF AMERICA” appear above Monticello, which is depicted in the reverse. The design has been modified in recent decades, despite the fact that it was unaltered for a long time after its creation. 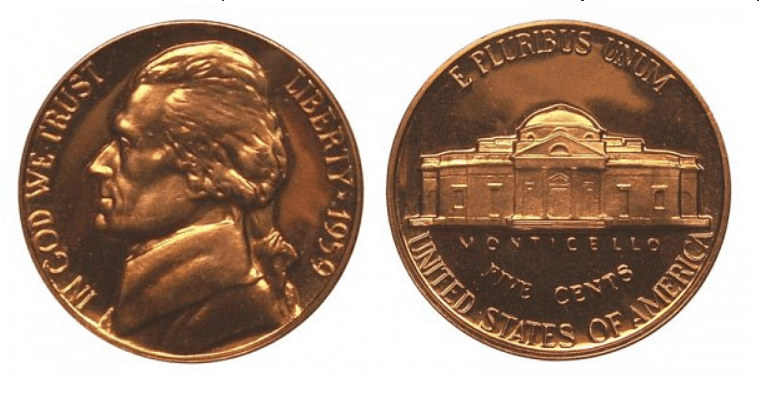 Several nickel coins commemorating the history of westward expansion were released in 2004 and 2005, and Schlag’s Monticello reverse returned in 2006, this time with a new forward-facing Jefferson.

The Jefferson nickel has a 75% copper and 25% nickel composition. From 1942 to 1945, the composition was changed to a combination of silver, copper, and manganese in order to preserve nickel for the war effort.

Only Denver and Philadelphia were struck in 1959 when the Jefferson nickel was minted with a total of 160,738,240 nickels produced this year the Denver mint produced by far the most.

28,397,291 nickels were minted in Philadelphia. The Denver issues are struck in a generally poor manner there are a few well-made examples, but the vast majority have poor strikes and fuzzy details.

The discerning collector should keep an eye out for well-struck examples when it comes to Philadelphia issues, which come in a wide range of qualities.

While the Philadelphia issues are obviously less common due to their lower mintage, both issues are relatively common in most grades.

The design is typical for pre-2004 Jefferson nickels, and the 1959 nickel has a pre-war composition of 75% copper and 25% nickel. The issue is known for having several minor repunched mint mark variations and doubled-die variations, but none of which are particularly prominent or valuable.

The so-called “black beauty” nickel is one intriguing variety that may add some worth. The planchets were not adequately annealed before being struck, resulting in these nickels.

These nickels appear to have been left in the smelting chamber for a little too long, resulting in a darker color ranging from gunmetal gray to jet black.

All denominations have examples of improper annealing, but 1959 nickels are particularly well-known for this.

Until they are in higher grades, where they may be worth a bit more due to their distinctive mistake, black beauties do not separate themselves much in terms of value.

Because of the continued circulation of the 1959 Jefferson nickel, its numismatic value is typically minimal. In fact, the average specimen is only worth its face value.

Yet, unusual strikes and grades may still earn you a nice premium on 1959 nickels. Uncirculated nickels do not typically surpass face value until you reach the highest grades.

The Philadelphia Mint produced the 1959 Jefferson nickel with no mint mark. It is much rarer than most other nickels from the 1950s, with a mintage of 27,248,000.

Here’s how much they’re worth:

A specimen graded by Professional Coin Grading Service as MS67 Full Steps is the most valuable 1959 Jefferson nickel. At a 2017 auction, it sold for $9,694.

A “D” mint mark can be found on the reverse (tails side) of the 1959-D Jefferson nickel from the Denver Mint, between Monticello and the coin’s rim.

With a total mintage of 160,738,240 pieces struck, the 1959-D nickel is much more common than the Philadelphia strike. Many of them are still in use today. Here’s a breakdown of how much they’re worth:

In 1959, the Philadelphia Mint produced a limited quantity of special collectors’ Jefferson nickels. Polished blanks and specialized dies were used to create them. Proofs are extremely well-struck coins with mirror-like exteriors that were marketed to coin collectors in proof sets.

In 1959, a total of 1,149,291 proof nickels were made. These coins aren’t meant to be used as money, but they are still legal tender. Several have been used as money. The following is a breakdown of their worth:

Weird grooves, weird colors, and even thinner-than-average pieces with porous surfaces that are much lighter than average appear on many 1959 nickels.

Sadly, the majority of the distinctive 1959 nickels you may come across in your pocket change are coins with post-mint damage, not mistakes.

Are there any mistakes from 1959 worth searching for? Yes, and there are many more types worth a lot of money! Now, let’s take a look at some of the most uncommon and precious error nickels that you may come across…

Even non-collectors are aware of the fact that there is one kind of error coin. The doubled die, or “double die,” as it is commonly known, is a two-die coin.

Many people believe that a coin with doubled features is always a doubled die.

A doubled die, on the other hand, denotes a specific sort of doubling. That is, the hub (which does the job of striking coins) doubles the die during an impression, resulting in a design on the die.

It’s a rare sight to see doubled dies. As a result, identifying a genuine doubled die is considerably more difficult than most people want to believe.

The fact that only the most extreme forms of doubled dies are really worth a lot of money makes it even more difficult to win a huge windfall from them.

Minor double dies (those that are obscure and/or require excellent magnification to detect) aren’t particularly valuable.

Any of the 1959 nickel doubled dies you come across is probably the same. None of the 1959 Jefferson nickels with doubled dies have been particularly noteworthy to date. And, in the grand scheme of things, those that have been discovered are generally not worth much money.

Jefferson’s eye or the lettering on the coin is most likely to double on a 1959 nickel.

The struck-off-center error coins are one of the most widely minted varieties. Only coins that are askew by around 5% or more are really worth any significant money, regardless of whether they are off-center.

Off-center 1959 nickel errors that are roughly 50% off-center and still display the entire date and (if applicable) mint mark are among the most valuable varieties.

Depending on the condition and size of the off-center mistake, such parts may be worth $100 to $200.

Tightly hold any 1959 nickels that have spiderwebs, curvy lines, or mounds of flat metal.

These might be worth a lot to coin collectors who specialize in errors and varieties, especially if they die cracks and die cuds.

When the die that creates the faulty coin starts to exhibit indications of age- or wear-related damage, such as cracks that spread across the surface of the die, these error varieties arise. The strains are transferred onto the finished coin as raised lines or abnormalities when these fissures are sliced into the die’s surface.

The more important the mistake is, generally speaking, the bigger or more obvious the fractures are.

A 1959 nickel might be worth anything from $3 to $5 because of minor die cracks that are somewhat hidden in and around the lettering.

Large-scale die cracks, however, may result in significant losses — $25 to $50 or even more. They may extend from one side to the other across a broad area of the surface.

Die cuds, or flattish, elevated metal blobs attached to the coin’s rim that obscure part of the coin’s design, are among the most valuable kinds of die cracks. They may earn up to $125 or even more per sale.

Mint marks were still manually applied to individual dies in 1959 by the United States Mint. Of course, no one is immune to making errors from time to time, even if they are experts at the mint.

These little mistakes could lead to some interesting errors when it came to punching mint marks onto dies. For example:

The majority of the 1959-D repunched mint mark varieties sell for about $3 to $10. More severe types, on the other hand, may command much higher prices! The early period of the series, from Jefferson nickels from the 1930s through the 1960s, is a remarkable and fascinating collection of U.S. coins.

The history of coinage is detailed here. The majority of the 1959 nickels ever made entered circulation and faded in appearance, losing much of their design detail.

In 1959, the amount of Jefferson nickels was substantial. Philadelphia and Denver were the two mints that produced the coins, but there was a big variation in how many were struck. Collectors are aware of significant differences in original mintages, but both types are considered plentiful today.