1952 Nickel Value – The 1952 nickel and its mint varieties were struck in abundance at three mints: Philadelphia, Denver, and San Francisco. Because of the plentiful numbers produced and availability, there are several mint varieties. It’s worth remembering that all three types are collected as part of a complete Jefferson nickel set, and there is a steady demand.

If you’re interested in understanding the value of the 1952 nickel, you’ve come to the right place because everything you need to know is here.

You may not be able to make a fortune with one piece, but many pieces can help you earn a few hundred dollars. This nickel, worth $0.05 to $9,400 depending on the type, is a relatively common variety that may pique your interest.

In circulated conditions, the 1952 nickel value has a face value of $0.05 per coin. Daily financial transactions, such as grocery shopping and cab rides, are the most common uses for such a currency.

The coin hasn’t been used for daily transactions, which is why it’s in an uncirculated state. 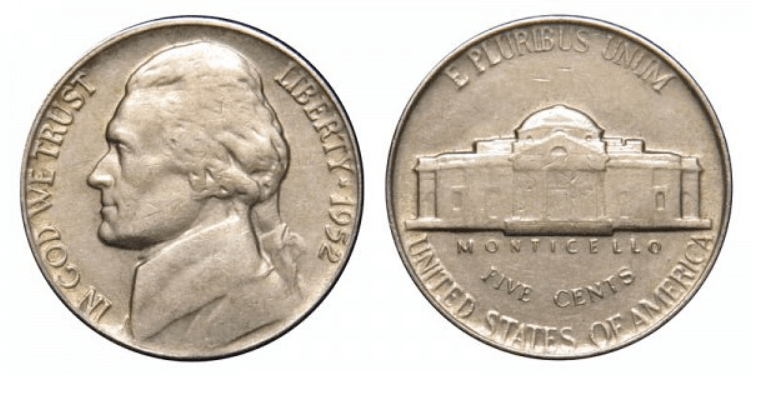 In excellent but uncirculated condition, this value climbs to $1. In contrast, each piece of an extremely fine 1952 nickel is worth $3. As a result, an uncirculated nickel has no scratches or scuff marks.

The most popular of the three distinct types of circulating nickels minted that year is the business-strike 1952 nickel from the Philadelphia Mint.

The 1952 nickel with no mint mark is still available enough today for collectors who want them, despite the fact that millions of specimens have been damaged, destroyed, or worn beyond recognition. A total of 63,988,000 were produced that year.

In circulated grades, Jefferson 1952 nickels value are worth 10 to 20 cents apiece, with uncirculated pieces selling for $1 to $3.

A specimen graded by Professional Coin Grading Service (PCGS) as MS66 with Full Steps details sold for $9,400, making it the highest price ever paid for a 1952 Jefferson nickel.

The least number of 1952 nickels were produced by the San Francisco mint, which served the west coast. 20,572,000 were issued into circulation, and practically all wore out from use. Enough was saved in both mint and worn states to ensure that adequate supplies are available.

Today’s collector has the difficult task of discovering enticing specimens.

Different mints are identified by mint marks. San Francisco uses the “S” on the back as a logo. The identifying mint mark is a tiny “S” next to Monticello’s rim, which can be found on the right side.

In circulated situations, the 1952 S nickel value has a worth of $0.1 to $0.2 due to its lesser condition. The 1952 D nickel value, on the other hand, is more common than this variety.

As a result, in the uncirculated category, you might expect to get about $1.25 for a really nice coin. Depending on the coin’s condition, this number may rise to $3 to $10 per piece. You may earn more money if the MS grade is better.

The Denver mint, which is situated in the heart of the United States, produced almost 30 million nickels between 1952 and 1954, and many of the early 1950s nickels have circulated extensively and become worn, damaged, or lost.

A “D” mint mark was added on the reverse to indicate Denver mint production. A “D” appears beside the building next to the rim of Denver mint nickels on the right side of Monticello.

Rarely occurring faults in such coins might boost their worth by several hundred dollars at public auctions ( foreign coins worth money ).

However, your 1952 nickel-graded PP3 or better might sell for $3 or more. It’s important to remember that a “D” isn’t a grade.

Uncirculated examples sell for $1.25 to $5, depending on their particular condition, whereas a typically worn 1952-D nickel value is worth roughly 25 to 70 cents.

A unique proof variety of the 1952 nickel is also available, with a collectors’ coin having a worth of $51 per piece or higher if it exhibits a significant flaw. Because they are not designed for financial transactions, proof coins have a higher value.

The early price of $51 was mostly for PR 65 nickels, and these coins are for collectors interested in building their coin collection.

With a diameter of 21.21mm and a mass of 5 grams, the 1952 Jefferson Proof Nickel is a stunning coin in Gem Proof condition, providing excellent value and wonderful for any Jefferson Nickel collection there were 81,980 produced by the Philadelphia Mint.

A limited edition of PR 68, on the other hand, is occasionally auctioned. The PR 68 Deep Cameo coin is the most expensive 1952 nickel ever sold.

Just for collectors, the United States Mint produced a small quantity of proof 1952 nickels. As part of 1952 proof sets, these were included.

The U.S. Mint mistakes happen from time to time, and they may be found on many 1952 nickels.

Common minor mistakes (such as tiny die breaks and repunched mint marks) are among the most frequent varieties of coin errors worth searching for on 1952 nickels, but there are also more uncommon and valuable doubled dies!

On 1952 nickel error value, here are some of the most prevalent mistakes and variations, along with an estimate of what they’re worth if you locate one.

When a working die is rubbed by a rubbing device twice, at two different angles or orientations, doubled dies to occur. A doubled die is created when this happens, resulting in a type of variety that collectors appreciate. As a result, certain parts of the coin are doubled on one side.

Doubling on the eye of Jefferson on the obverse (head’s side) of the coin, or doubling in the inscriptions “MONTICELLO” and “FIVE CENTS,” is common on Jefferson nickels.

Minor doubled dies are typically worth $25 to $50, but there are no important or extremely valuable doubled dies among 1952 Jefferson nickel.

The result can be an off-center strike when a coin isn’t centered on the presses properly or the dies aren’t aligned properly. When the coin is 5% to 10% off center, these popular errors are worth $3 to $10. Off-center errors of “greater magnitude” are worth significantly higher values.

Off-center errors that are around 50% off-center but still display the whole date and mint mark (when applicable) are the most attractive. Such an off-center strike on a 1952 Jefferson nickel might be worth well over $100.

Each working die for the Denver or San Francisco Mints was individually hand-punched with coin mint marks in the 1950s. Tilted mint marks, upside-down mint marks, and other strange anomalies were all allowed for under this condition.

The mint employee might simply repunch the mint mark in the proper spot in many circumstances rather than throwing out the die, and some varieties of repunched mint marks may sell for $5 to $10 or more, depending on how severe they are.

-Value Of 1952 Nickels With Die Breaks

Cracks and other forms of deterioration tend to develop in coin-making dies as they age. Raised lines and bumps are common signs of such damage on completed coins.

Piece values on coins like this are extremely unique, rising as the odd objects get bigger or more apparent on the coin, as with most error coins.

At least twice as much as face value, all 1952 Jefferson nickel are worth more. In reality, there are far more valuable nickels from 1952. Some are worth thousands of dollars, even!

To find the old nickels they need, many collectors resort to searching through bank rolls.

Of course, ordinary change in your pocket can also be valuable. Also, check through old change jars and piggy banks for your treasures. There is still a lot of 1952 Jefferson nickel in circulation, and they’re just ripe for the picking. Several of these ancient nickels, on the other hand, are valuable.