1951 Nickel Value – A Jefferson nickel with three types is available in the 1951 nickel. Nickel, along with proof coins, was minted in three different locations. The most valuable and coveted coins are the “proof” ones.

Three Mints produced the 1951 nickel. Denver, Philadelphia, and San Francisco are the three mints. In this variation, the Philadelphia Mint produced 28,609,500 coins. These coins were struck at the Denver Mint for 20,460,000 pieces.

The dies were likewise customized for these coins in addition to that. As a result, these coins have a higher value than the other varieties, and most of them are coveted by collectors ( foreign coins worth money ).

You’ll have to keep reading if you want to learn more about the 1951 nickel’s value.

Features Of The 1951 Nickel

The 1951 nickel was conceived by Felix Schlag. The coin’s obverse side depicts a picture of Jefferson, the country’s founding father, with the words “Liberty” and the year on his left side. 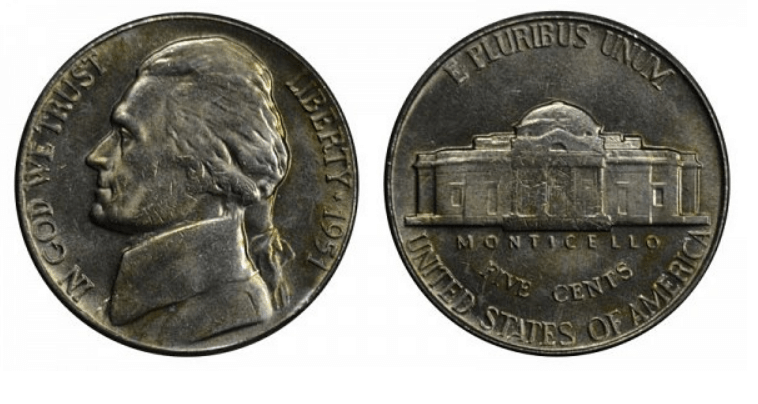 An inscription of “Five Cents” and “United States of America” can be found beneath the moniker, as well as the phrase “E Pluribus Unum.”

In 1951, there was little demand for low-denomination coins. The largest coin producer, Philadelphia, produced 28.6 million nickels in the year. This is an amazing find: a nice-looking example with little wear. A popular collection theme is vintage Jefferson nickels.

Coins from the 1950s Philadelphia mint did not have mint marks. On Philadelphia coinage, the tiny gap between the rim is empty to the right of Monticello.

15 cents to 50 cents each is a typical circulated price. Uncirculated coins have a range of $2.50 to $10. A mint condition example with Full Steps at the foot of Monticello is worth $25 or more.

As a result, that well-loved 1951 nickel with no mint mark value in your pocket change might be worth a few times face value, even if it isn’t worth hundreds of dollars!

In lightly worn condition, the 1951 San Francisco mint nickel is beginning to appreciate. It is the lowest mintage variety of the Jefferson nickel series, with 7,776,000 coins struck and released. The majority of the coins were heavily used.

In worn condition, it is one of the rarest Jefferson nickels.

The San Francisco variety is distinguished by an “S” mint mark on the reverse. The “S” beside the rim may be found to the right of Monticello.

Early on, coin collectors realized that the 1951-S Jefferson nickel would be produced in limited quantities, so they started saving it in large numbers. When it comes to determining how rare a coin is or what its value of 1951 Jefferson nickel may be, mintage numbers don’t always matter. Nickel values from 1951 are as follows:

A typical circulated specimen costs between 10 and 30 cents. A fair uncirculated example might cost $1.50 to $10. Full Steps specimens sell for $100 or more.

As a result, even if ordinary worn or mint examples of this currency aren’t valuable in themselves, the top-end specimens are particularly the Full Steps pieces. This is about overall quality.

Jefferson nickels were frequently poorly struck at branch mints (mints outside of Philadelphia). It’s also dependent on the strike in the case of the Full Steps designation. The finer the details become when the strike is stronger.

To provide complete information on the coin, even the tiniest details, they were also purposefully struck at least twice.

The Philadelphia Mint produced 57,500 pieces of these proof nickels. The great majority of these were preserved by collectors and are in good shape today when compared to the 1951-S mintage.

As a result, while rare, they have an ample supply for collectors.

A typical 1951 Jefferson nickel, grading good, is worth around $50. So, if you’ve learned anything, it’s that price varies depending on the condition.

The “D” mint mark on the reverse of a Denver mint nickel distinguishes it. Denver struck over 20 million nickels in 1951, and they are still available today at a reasonable cost. Most are sold at or near face value in circulated condition.

The mint mark of Denver was placed on the other side of Monticello. A tiny “D” next to the building’s right side indicates a Denver mint type.

A well-liked worn example might cost anywhere from 20 to 50 cents. It costs $3 to $10 for an uncirculated specimen.

In the end, uncirculated specimens are worth more than circulated ones. Yet, the uncirculated prices are lower than those for the Philadelphia pieces, despite the fact that fewer 1951-D nickels were produced. Why is that the case?

Mintage numbers aren’t always scarce. The number of coins that survive and the population figures at different grading stages are more important factors in determining rarity. Fewer of the Philly Mint specimens seem to have been preserved in mint condition, compared to others.

Finding old currency from around the time the 1951 Jefferson nickels were first released is normally difficult. You may try searching through old bankrolls for 1951 nickels, including mistakes and varieties if you’re looking for them.

For $2 per standard roll of 40 nickels, you can purchase them from your local bank or financial institution.

To determine the significance of the mint variety and premium 1951 nickel value, follow a few steps. The number of mintages per year varies depending on demand, and the mintages that survive today are unknown.

Jefferson nickels from the early 1950s are also plentiful in typical conditions, which is another factor to consider. The fact that they are rare in their nice collectible condition is what matters.

Coins in worn condition are plentiful throughout the later vintage years. Mint State examples are the most in-demand. One of the few nickels starting to show a premium in the lightly circulated condition is the 1951 San Francisco nickel.

In the collection, collectors usually include an example of each year’s nickels. Collectors seek a coin with the San Francisco nickel, which is identified by its grade.

As a result, a 1951 Jefferson nickel value appears to be an old regular nickel to many persons who are not involved in the hobby. naturally, once you understand the difference, you’ll be able to tell!