1950 Nickel Value – Do you want to know how much your 1950 nickel is worth? It’s all settled here! Particularly if you possess a 1950-D nickel! The rarest regular-issue coin in the series, the 1950-D nickel is also very valuable, and if you have any 1950 Jefferson nickels that you believe are unusual, they may be collector’s items or variations worth a lot of money ( foreign coins worth money )!

We’re going to share a slew of fascinating facts about these antique nickels, which will be interesting to investigate.

Features Of The 1950 Nickel

A portrait of Jefferson’s mansion Monticello is depicted on the obverse, with the name written below it.

On the top of the coin is the saying “E Pluribus Unum.” The phrases “United States of America” and “Five Cents” are carved into the ground beneath Monticello.

Only in the 1940s were the silver composition nickels released. Nickels, on the other hand, were not produced in silver in 1950. Instead, since these coins have a 74% copper content and a 25% nickel content, they will not provide you with a high melting value. 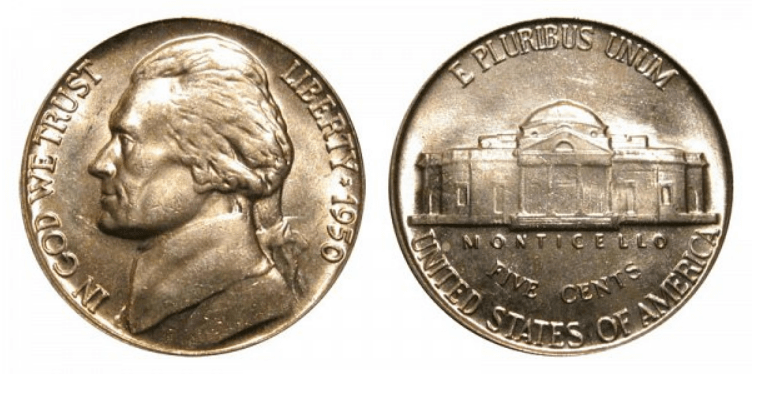 The melt value isn’t that great since they weigh five grams.

As a result, most people keep the 1950 Jefferson Nickel or sell it in its original form to include it in their collections.

The type and condition of the coin determine its worth, which is a 1950 nickel value. There are a D mint mark, proofs, and a 1950 nickel with no mint mark.

Lastly, in PR65 condition, the proof nickels will be worth more than $60 each. Typical uncirculated examples cost $2 to $7, while an average circulated specimen costs roughly $1.

The 1950 nickel value is considered a scarce coin because it was produced at the Philadelphia Mint when coins with “P” mint marks were not being produced.

These are now considered to be better-date coins since only 9,796,000 were made.

The 1950-proof nickel was sold in 1950-proof sets, and it was only available for coin collectors. Just 51,386 of these collector-only coin sets were produced, and they were all released.

Those that are heavily worn would be virtually indistinguishable from their circulation-strike counterparts, as it’s possible that a few escaped into circulation and were spent as money.

In 1950, the Denver Mint struck 2,630,030 Jefferson nickels without giving it much consideration in the public eye. In this particular year, when the American economy was mired in the third year of a postwar recession, there was little demand for the new nickel coins in the territories served by the Denver Mint.

Most of the year’s mintage was accounted for by previous years.

As a result, new nickel coinage for the Denver Mint was not ordered until summer, and no additional coins were ordered for the remainder of the calendar year when it was delivered.

Due to the tireless efforts of coin promoters, the general public was only made aware of this low mintage and the coin’s potential as a collectible and investment item.

Several of these promoters had never worked in the coin business before, but they saw the 1950-D nickel as a gateway to riches.

The issue was traded freely as a modern “rare” for years as a consequence of its scarcity in 1950-D nickel. The coin, which was popular and mainstream, piqued fresh interest in modern coin collecting and inspired the era of roll collecting and investing.

Why is a 1950 D nickel valuable? Due to the low mintage numbers and widespread hoarding, the 1950-D Jefferson Nickel is a unique coin. The Jefferson Series had a limited edition of 2,000,000 coins.

Mint State examples are plentiful because these coins were hoarded upon release.

In grades ranging from Mint State to the lower circulated grade of Good, 1950 nickels value are premium value coins. When compared to standards, grading quantifies the degree of wear.

For decades, it has piqued the interest of collectors. Collectors quickly recognized it as a low-production year for coinage shortly after the release of the 1950s nickels.

Collectors were not warned to check numbers struck from Philadelphia and Denver because San Francisco did not strike any nickels.

Both mints produced below-average numbers for the year, as it eventually turned out. From 1950, the nickel value was based on low production numbers and availability. The mint variety collectors want must be identified.