1944 Nickel Value – Due to its composition and year of circulation, the 1944 nickel is a unique coin. Every nation was focused on protecting its treasures and resources while World War II raged on. As a result, the currency coins were likewise impacted. One of the most popular coins at the time was the 1944 nickel.

As a result, every collector wants this coin in their collection ( foreign coins worth money ).

The Jefferson Five Cents, which was also a Wartime nickel issue and is regarded as a coin with a high-quality strike because of the heavy overuse of dies during manufacturing, is a coin that is widely distributed and of considerable interest to collectors.

Jefferson Nickels from 1938 to the 1960s, with 1944 being the most valuable. This coin is collected for its silver content alone by some treasure hunters, but in the right condition with the correct mint mark, it may be worth more than the silver in it.

The quality of strikes was so low in Denver and Philadelphia that nickels from these mints are still found in circulation. The number of strikes was high.

Minting with weak strikes results in the double effect of demonstrating incomplete centers and exposing planchet markings, despite the fact that typical nickels from this category have adequate luster.

The wartime nickels were extensively saved by the roll when new, both by collectors and others, as were all coins issued after the Great Depression.

As a consequence, in uncirculated conditions, none of the coins are considered rare, although several rarities exist in the highest grade levels.

Numismatic Guaranty Corporation has just graded 49 examples of all Wartime Nickels as MS-68, and none finer. The year 1943-P was written on about a third of these MS-68 coins.

This currency is worth at least its silver weight in the circulated state. As of September 1, 2022, this coin’s silver melt value is $1.00. The current silver spot price of $17.76 per ounce is used to calculate the melt value.

Since all 1944 Jefferson nickels contain silver, any you find are worth keeping. These four things determine how much a specific 1944 silver nickel is worth:

Now, let’s examine the different types of 1944 Jefferson nickels and what they are worth:

The 1944 silver nickels with a huge “P” mint mark on the reverse (tail’s side) above Monticello’s dome were struck at the Philadelphia Mint and are among the most prevalent. In Philadelphia, a total of 119,150,000 nickels were produced. 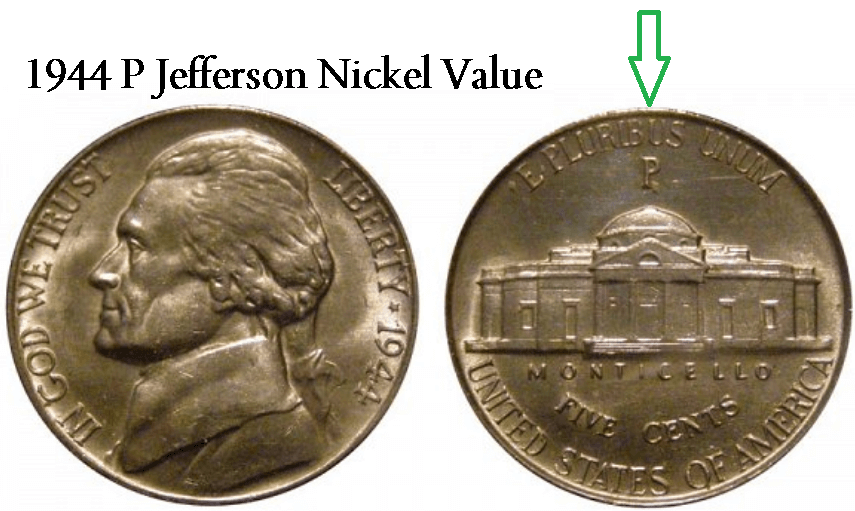 The 1944-P Jefferson nickel is one of the most plentiful silver alloy subtype coins, struck in the setting of conflict against an alloy created to conserve copper and nickel.

Uncirculated specimens are plentiful, and they may be obtained at a low cost. However, fully struck specimens are rare. Francis Henning, the only wartime counterfeiter who chose a date, counterfeited it in the 1950s.

He forgot to include the subtype’s distinguishing big mint mark above Monticello in his decision, which would come back to haunt him.

In very fine condition, the 1944 P nickel is worth around $2.75. The value is roughly $3 in excellent condition.

The Denver Mint produced 32,309,000 1944-D silver nickels with a large “D” mint mark over Monticello. It is less prevalent than its Philadelphia counterpart, particularly with Full Steps embellishments, and it isn’t the least common of the 1944 nickels. 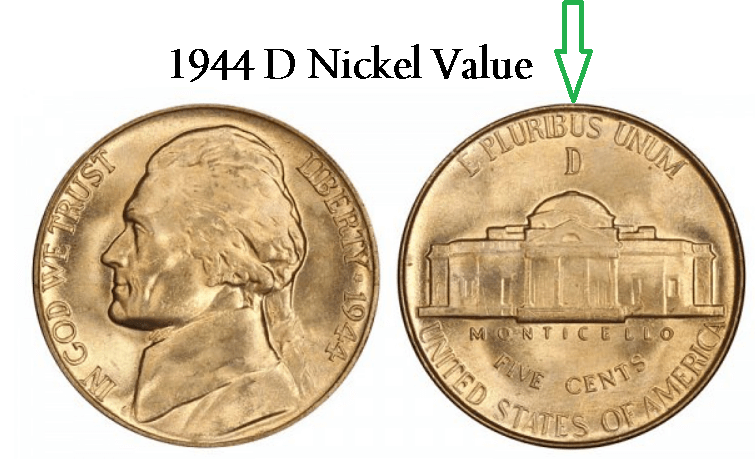 In excellent condition, the 1944 D nickel is worth about $2.75. The worth is roughly $3 in very good condition.

The 1944-S is the rarest of the three varieties of Jefferson nickels released in 1944. The coin above Monticello has a large “S” mint mark on the reverse and was struck at the San Francisco Mint. 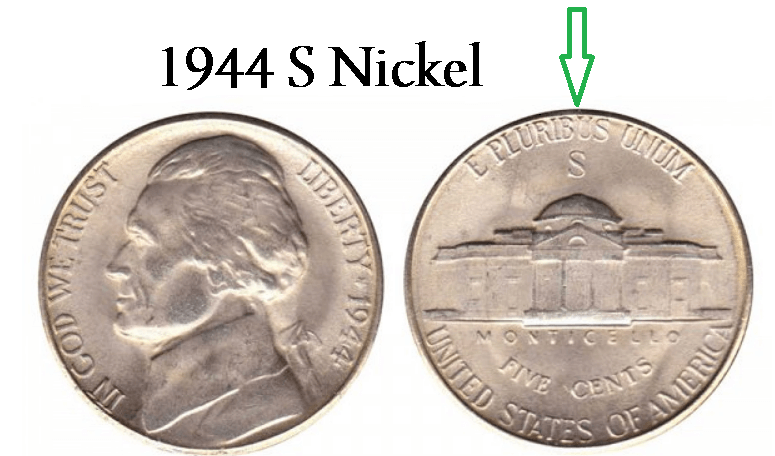 With a mintage of just 21,640,000 specimens struck, this is the rarest of the three types of nickels produced that year.

Errors and varieties are found in some of the most valuable old Jefferson nickels. Of course, genuine mint mistakes and common (and valueless) post-mint damage are easily confused by some collectors.

Here’s a list of the most valuable 1944 nickel errors value, along with other coins:

The pattern on a coin may be stamped twice at two slightly different angles when it is struck on a rubbing device. A doubling will also appear on every coin created by the doubled die when this occurs.

When the doubling on the coin is clearly visible to the naked eye, doubled dies are among the most uncommon and desired of all error and variety coins.

With 5x magnification, you may see minor doubled dies on the obverse (head’s side) and reverse of each coin, despite the fact that no major doubled dies are known among 1944 nickels.

When a coin is misaligned with the dies on the presses or the dies themselves are misaligned, off-center errors occur, which are dazzling oddities. The greater the amount of the design that is missing, generally speaking, the greater the cost.

Nonetheless, half-missing off-center coins with complete date and mint mark (if present) are the most valuable.

U.S. Mint troops were stationed back in the 1940s. Mint marks were individually punched onto dies by hand by Mint officials. Mint marks were slightly in the wrong place, double punched, etc., so there was a lot of room for error.

Collectors value all of these repunched mint mark types, and they’re worth a little bit of cash.

Those with tripling, quadrupling, or a properly positioned mint mark over another that is sideways or upside down may be worth much more, from $50 to $100 and up.

Why Is the 1944 Jefferson Nickel So Rare?

The composition of the nickels produced between 1942 and 1945 differs from that of normal Jefferson nickels. Because they were minted during wartime, this is the case.

The copper content in the coin decreased from 75% to 56% during the war, with 35% silver and 9% manganese substituted for 25% nickel.

Why the Jefferson five-cent coin was minted in silver in the first place is a mystery that many collectors want to solve.

The narrative begins in 1939, with the World War II global conflict that lasted from 1939 to 1945, and which saw the United States become involved in 1941.

Nickel, which was used in the manufacture of artillery, needed to be rationed by the US government for the war effort.

An alloy of 75% copper and 25% nickel has been used to make the Jefferson nickel. As a result, in October 1942, the United States Congress approved a statute allowing nickel to be manufactured from an alloy of 56% copper, 35% silver, and 9% manganese to redirect it away from the five-cent coins and toward a more vital military function.

The presence of a large “P,” “D,” or “S” mint mark over the dome of Monticello distinguishes the first silver war nickels from ordinary 1942 nickels. The regular alloy reappeared in 1946 when the mint mark moved back to its previous position just to the right of Monticello. The Jefferson war nickels were produced until 1945.

When compared to most other worn Jefferson nickels from the period, war nickels are extremely collectible and valuable.

Fortunately, silver Jefferson war nickels can still be found in circulation, especially by searching bank rolls of nickels! You first need to know what condition (or grade) your coin is in in order to determine the true value of your 1944 nickel value.