1940 Nickel Value – The United States of America celebrated its 100th birthday in 1938. The face of the five-cent coin was redesigned by the Mint. The Buffalo Nickel was replaced by the newly created Jefferson Nickel. The Jefferson Nickel has been in circulation for many years and continues to be minted today.

Early versions, such as those from 1940, maybe coveted by collectors, despite the fact that they may not believe that these coins have any worth above their face value. 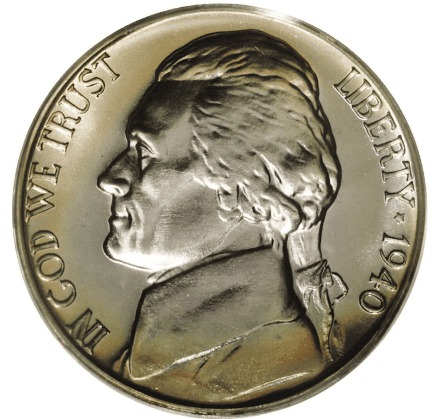 From 1938 through 1964, the US Mint produced Jefferson nickels, although not all of them had the same makeup. The early series 1940 nickel coin was produced with 75% copper and nickel. On the obverse of the coin, you may see President Jefferson.

He was the United States’ third President and the author of the Declaration of Independence.

Following Washington and Lincoln, he was the third President to have his picture on an American coin.

The nickel reverse has his mountaintop residence in Virginia, Monticello. An original house picture delivered from an angle was rejected by US Mint officials and the Treasury Department, who wanted a direct view of the famed structure.

This coin was never popular among collectors because Felix Schlag’s design wasn’t appreciated enough. Collecting the Jefferson nickel series, on the other hand, may be difficult and exciting.

There are three Jefferson series eras that you can identify:

By 2020, as an established collectible item, the 1940 Jefferson nickel will have surpassed the 80-year mark. As a result, you’ll notice that fewer uncirculated and AU coins are becoming more valuable to collectors.

If in Mint State (uncirculated), the 1940 version of the Jefferson Nickel is worth $15 on average, whereas one in poor condition is worth just $0.20. This will enhance the coin’s desirability and increase its numismatic value if it contains a flaw or is certified.

As previously stated, the infamous FS label affects pricing as well, which deserves mention. Each kind of 1940 nickel has a value listed here…

In 1940, the Philadelphia mint produced significantly more Jefferson nickels than the previous year, producing 176,485,000. Surprisingly, despite its high-minted status and popularity in the 1940s, this series shows no discernible differences.

The majority of 1940 Jefferson nickels aren’t valuable. As a result, you should focus on the most valuable and finest available piece on the coin market.

The grade, condition, and whether the building’s steps are completely struck (Full Steps) affect the worth of a 1940-S Jefferson Nickel. If your pocket change includes grades ranging from 10 cents to $1 (AU) or less, and $2 plus for uncirculated raw examples, expect to receive a grade of about uncirculated.

Jefferson Nickels are not silver but are mostly copper with a balance of nickel that gives them a “silver” appearance the only exception is in 1942-1945 when they did contain 35% silver and 75%, but they must have the large mint mark on the back and above Monticello Monument to attain higher values.

If the steps of the building (Full Steps) are fully struck on the 1940-D Jefferson Nickel Value, expect to see a value from 10 cents to $1 if found in your pocket change, and $2 plus for uncirculated raw examples.

Jefferson Nickels are not silver, but they do contain mostly copper with a little nickel balance that gives them the appearance of silver. They must have a big mint mark on the back and above the Monticello Monument to reach higher values.

You might consider reminded coins collectible, especially mint-state coins because only 14,158 minted-proof Jefferson nickels were produced in 1940. Special dies on polished planchets were made by the Philadelphia mint to strike them.

Errors in the 1940 Jefferson Nickel, which has collector value beyond its conservation, can be found in the market. The following instances show that the Jefferson Nickel 1940 cost between $70 and $600:

Here are a few examples of 1940 nickels with significant errors and variances, as well as their respective values.

In general, these are the most common and costly types available. They’re also quite scarce, which is a plus. Even the most committed pocket change collectors may spend years without ever stumbling across an actual double-die variation on any currency.

You’ll be looking for a long time if you happen to find one of those doubled 1940 nickels. For the 1940 nickel, there aren’t any major double dies known. However, it does not mean that you cannot be the first to discover a new variety!

Any little doubled dies seen on 1940 nickels might cost $25 to $100 or more, depending on the region and size of the variety.

Coin dies often split as they age. The effect will be a lifted piece of blank metal that seems linked to the rim if these flaws occur near the coin’s edge.

Certain die crack errors, such as this, are known as cuds They can be worth $50 to $100 or even more depending on the size and position of the cud. Coins with prominent die cracks across the face of the coin or through lettering are typically quite valuable with several die crack errors snagging $10 to $50

An off-center strike occurs when a coin isn’t centered on the dies or the dies are misaligned. The degree of off-centered in a strike, as well as the presence of the coin’s entire date, have a major influence on the worth of error coins.

A 5% to 10% off-center 1940 nickel could go for $10 to $20. One may sell for $100 and up if it’s 50% off-center and still includes the entire date and mint mark. It’s worth noting that minor off-center strikes (when the rim on one side of the coin seems to be thicker than the other) are quite prevalent faults and have no additional value.

Mint marks were punched onto individual dies by coiners at the United States Mint in the 1940s, resulting in mint marks that appear in slightly varying locations or orientations on the 1940 Jefferson nickel. Since the initial attempt was in the incorrect place or was incorrectly positioned, the mint mark was sometimes punched multiple times.

While pieces with extraordinary mint mark varieties may bring substantially more, most 1940 nickels with repunched mint marks are worth $3 to $5.

Error varieties with doubled and tripled mint marks are highly sought after. The “D” and “S” mint marks can be worth $50 to $100 or more if you check the backs of all 1940 nickels for signs of multiple strikes.

On the 1940 Jefferson Nickel grading scale, there are four primary levels. Uncirculated coins would be in the top tier. An uncirculated coin must be almost flawless as if it had just been minted, in order to be classified as such.

This currency would appear to have been untouched by human hands and only circulated in utilitarian circulation.

-Mint State Grade: The surface of a high-ranking collectible nickel is free of wear. The state of these nickels when minted is known and defined as Mint State.

Start by examining Jefferson’s jawline. At the jaw, notice the significant contour of the lower cheek. This region is elevated and has a rounded top. The mint luster that covers the region is the same hue and feel as the rest of Jefferson’s face. In comparison to the surrounding metal, any wear dulls the lower cheek and jaw.

-Good: The lowest grade for collectible coins is “good.” You may see the flatness that covers most of Jefferson’s face in these, which has a worn look. On the nickel surface, the face contours and hair details are not apparent, while the high and low parts are almost totally merged.

-Extra Fine: You may detect light signs of wear on the coin surface as a consequence of having spent some time in circulation. Most changes, which primarily affect the President’s cheek, are visible on high points. Nickel, in particular, has a dull metal color.

-Fine: Fine coins will show signs of wear and damage over time, as opposed to uncirculated coins that have been graded for a higher grade. The coin’s images and inscriptions, on the other hand, are not damaged enough to be affected. The coin’s surfaces will almost certainly be scratched to some degree.

You may see in a summary that from the years leading up to 2008 until today, the prices of 1940 Jefferson Nickels have trended downwards. High-quality types, framed within the category FS and the reverse 1938’s reverse, have maintained their value better.